Kansas City (often abbreviated as "KCK" to differentiate it from Kansas City, Missouri) is the third-largest city in the state of Kansas, the county seat of Wyandotte County, and the third-largest city of the Kansas City metropolitan area. It is part of a consolidated city-county government known as the "Unified Government". Wyandotte County also includes the independent cities of Bonner Springs and Edwardsville. As of the 2010 census, the city had a population of 145,786 residents. It is situated at Kaw Point, which is the junction of the Missouri and Kansas rivers.

In October 1872, "old" Kansas City, Kansas, was incorporated. The first city election was held on October 22 of that year, by order of Judge Hiram Stevens of the Tenth Judicial District, and resulted in the election of Mayor James Boyle. The mayors of the city after its organization were James Boyle, C. A. Eidemiller, A. S. Orbison, Eli Teed and Samuel McConnell. In June 1880, the Governor of Kansas proclaimed the city of Kansas City a city of the second class with Mayor McConnell present.

In March 1886, "new" Kansas City, Kansas, was formed through the consolidation of five municipalities: "old" Kansas City, Armstrong, Armourdale, Riverview, Wyandotte. The oldest city of the group was Wyandotte, which was formed in 1857 by Wyandot Native Americans and Methodist missionaries.

In the 1890s, the city saw an explosive growth in population as a streetcar suburb of Kansas City, Missouri, from which it takes its name; this growth continued until the 1930s. It was one of the nation's 100 largest cities for many U.S. Census counts, from 1890 to 1960, including 1920, when it had a population of over 100,000 residents for the first time.

As with adjacent Kansas City, Missouri, the percentage of the city's most populous ethnic group, non-Hispanic whites, has declined from 76.3% in 1970 to 40.2% in 2010. In 1997, voters approved a proposition to unify the city and county governments creating the Unified Government of Wyandotte County.

Neighborhoods of Kansas City, Kansas, include the following:

Kansas City lies in the Midwestern United States, as well as near the geographic center of the country, at the confluence of the longest river in the country, the Missouri River, and the Kansas River (also known as the Kaw River). The city lies in the Humid continental climate (Köppen Dfa) zone, with four distinct seasons, and moderate precipitation, and is part of USDA plant hardiness zones 5b and 6a Being located in the center of North America, far removed from a significant body of water, there is significant potential for extremes of hot and cold swings in temperature throughout the year. Unless otherwise stated, normal figures below are based on data from 1981 to 2010 at Downtown Airport. The warmest month of the year is July, with a 24-hour average temperature of 81.0 °F (27.2 °C). The summer months are hot, but can get very hot and moderately humid, with moist air riding up from the Gulf of Mexico. High temperatures surpass 100 °F (38 °C) on 5.6 days of the year, Precipitation, both in frequency and total accumulation, shows a marked uptick in late spring and summer.

Kansas City is situated on the edge of the "Tornado Alley", a broad region where cold air from the Rocky Mountains in Canada collides with warm air from the Gulf of Mexico, leading to the formation of powerful storms especially during the spring. A few areas of the Kansas City Metropolitan Area have had some severe outbreaks of tornadoes at different points in the past, including the Ruskin Heights tornado in 1957, and the May 2003 tornado outbreak sequence. The region can also fall victim to the sporadic ice storm during the winter months, such as the 2002 ice storm during which hundreds of thousands lost power for days and (in some cases) weeks. Kansas City and its outlying areas are also subject to flooding, including the Great Flood of 1993 and the Great Flood of 1951.

There were 53,925 households of which 37.0% had children under the age of 18 living with them, 39.1% were married couples living together, 18.9% had a female householder with no husband present, 7.0% had a male householder with no wife present, and 34.9% were non-families. 28.8% of all households were made up of individuals and 8.9% had someone living alone who was 65 years of age or older. The average household size was 2.68 and the average family size was 3.32.

The racial composition of Kansas City, Kansas, as of 2010, was as follows:

River transportation was important to early Kansas City, Kansas, as its location at the confluence of the Missouri and Kansas Rivers afforded easy access to trade. A portion of I-70 was the first project in the United States completed under the provisions of the new Federal-Aid Highway Act of 1956 (though not the first constructed or to begin construction). 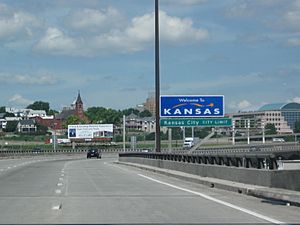 Interstate 70 as it enters Kansas, crossing the Kansas River.

Kansas City, Kansas, has a number of buildings that are listed on the National Register of Historic Places. The city is home to the Roman Catholic Archdiocese of Kansas City in Kansas, which covers 12,500 square miles (32,000 km2) in eastern Kansas.

Memorial Hall is a 3,500-seat indoor arena/auditorium located in the city's downtown. The venue, which has a permanent stage, is used for public assemblies, concerts and sporting events. In 1887, John G. Braecklein constructed a Victorian home for John and Margaret Scroggs in the area of Strawberry Hill. It is a fine example of the Queen Anne Style architecture erected in Kansas City, Kansas. 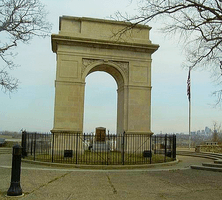 The Rosedale Arch, dedicated to the men of Kansas City, Kansas, who served in World War I, is a small-scale replica of France's famous Arc de Triomphe. It is located on Mount Marty in Rosedale, overlooking the intersection of Rainbow and Southwest boulevards.

Wyandotte High School is a notable public school building located at 2501 Minnesota Avenue. Built in 1936 as a Works Progress Administration project, the school was later designated as a Historical Landmark by the city in 1985 and placed on the National Register of Historic Places on April 30, 1986. In 1889, the Wyandotte County Museum and Historical Society was established as a permanent repository of the county's history. The Argentine Carnegie Library, the only Carnegie library that exists in the metropolitan area, was built in 1917.

Kansas City, Kansas is served by the The Kansan, a daily newspaper which ceased its print publication and became an online-only paper in 2009. Newspapers serving the city's suburbs include The Record (serving Turner, Argentine and Rosedale), Piper Press (serving Piper) and The Wyandotte West (weekly publication for western Wyandotte County).

Weekly newspapers include alternative publication The Pitch, faith-oriented newspaper The Kansas City Metro Voice, The Wyandotte Echo (which focuses on legal news), The Call (which is focused on the African-American community), business newspaper Kansas City Business Journal and the bilingual publication Dos Mundos.

All content from Kiddle encyclopedia articles (including the article images and facts) can be freely used under Attribution-ShareAlike license, unless stated otherwise. Cite this article:
Kansas City, Kansas Facts for Kids. Kiddle Encyclopedia.