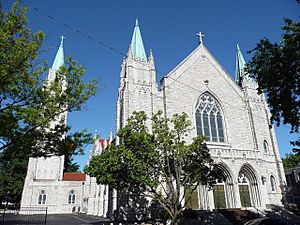 Main facade of the cathedral.

The Rev. Bernard Kelly was appointed by Bishop Thomas Lillis of the Diocese of Leavenworth to organize St. Peter's parish on October 7, 1907. The parish's first Mass was held in the Bishop's residence on Sandusky for 126 people on December 8, 1907. Fund raising began for a combination church and school and the cornerstone for the new building was laid on March 14, 1908. The facility was dedicated on September 7 of the same year. A rectory was built from 1916-1917. Construction began on the current church building in 1925. The first Mass was celebrated in the building on August 1, 1927 and it was dedicated on September 5 of the same year.

On May 10, 1947 the See City was transferred from Leavenworth, Kansas to Kansas City by Pope Pius XII. Bishop George Donnelly consecrated St. Peter's as a cathedral in 1948. Twelve gold crosses that represent the Twelve Apostles were placed between the Stations of the Cross . A portable Bishop's throne was placed in the sanctuary.

A parish center was built in 1992, and the interior of the cathedral was renovated in 1998. From October 6, 2006 to October 8, 2007 the parish observed its centennial. A statue of St. Joseph the Worker was placed in the Centennial Courtyard and a time capsule, to be opened in 2057, was buried nearby.

St. Peter's School opened in the fall of 1908 with 95 elementary and 10 high school students. The combination church and school building became too small and a new structure was built in 1912. The school had 430 students by 1937. A fire destroyed the building in 1943. A new and larger building was dedicated on October 23, 1955. As the population shifted from the city to the suburbs the enrollment in the school started to decline. In 2006 there were only 110 students enrolled at St. Peter's. The archdiocese consolidated the parochial schools in eastern Wyandotte County into Resurrection Catholic School in 2007 using the St. Peter's School building. 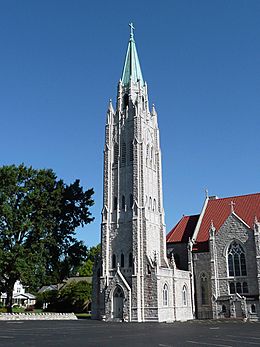 Tower on the southwest corner of the cathedral.

The following priests have served St. Peter's as its pastor. Since 1947 they have also served as Cathedral Rector:

All content from Kiddle encyclopedia articles (including the article images and facts) can be freely used under Attribution-ShareAlike license, unless stated otherwise. Cite this article:
Cathedral of Saint Peter (Kansas City, Kansas) Facts for Kids. Kiddle Encyclopedia.