Leavenworth is the county seat and largest city of Leavenworth County, Kansas, United States and is part of the Kansas City metropolitan area. As of the 2020 census, the population of the city was 37,351. It is located on the west bank of the Missouri River. The site of Fort Leavenworth, built in 1827, the city became known in American history for its role as a key supply base in the settlement of the American West. During the American Civil War, many volunteers joined the Union Army from Leavenworth. The city has been notable as the location of several prisons, particularly the United States Disciplinary Barracks and United States Penitentiary, Leavenworth.

Leavenworth, founded in 1854, was the first city incorporated in the territory of Kansas. The city developed south of Fort Leavenworth, which was established as Cantonment Leavenworth in 1827 by Colonel Henry Leavenworth. Its location on the Missouri River made it a destination for refugee African-American slaves seeking freedom from the slave state of Missouri in the antebellum years. Abolition supporters helped them find refuge. In the years before the American Civil War, Leavenworth was a hotbed of anti-slavery and pro-slavery agitation, often leading to open physical confrontations on the street and in public meetings.

On April 3, 1858, it was in Leavenworth, Kansas that the "Leavenworth Constitution" for the state of Kansas was adopted. Although the federal government never approved this early version of the state constitution, it was considered one of the most radical of the four constitutions drafted for the new territory because it included freed blacks as citizens.

Refugee African Americans continued to settle in the city during the war. By 1865 it had attracted nearly one-fifth of the 12,000 blacks in the state. Charles Henry Langston was an important African-American leader in Leavenworth and northeast Kansas in the Reconstruction era and afterward. In Kansas, Langston worked for black suffrage and the right to sit on juries, testify in court, and have their children educated in common schools. African Americans gained suffrage in 1870 after passage of the federal 15th constitutional amendment, and the legislature voted for their right to sit on juries in 1874.

Fort Leavenworth was located outside the city limits until its territory was annexed by the city on April 12, 1977.

In 2008, an underground series of "vaults" was found in the city, apparently built during the late 19th century. 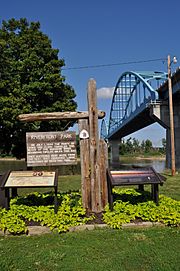 Leavenworth is on the west bank of the Missouri River

The city lies on the west bank of the Missouri River in the Dissected Till Plains region of North America's Central Lowlands. Four small tributaries of the river flow generally east through the city. From north to south, these are Quarry Creek, Corral Creek, Three Mile Creek, and Five Mile Creek.

Leavenworth, along with the rest of Leavenworth County, lies within the Kansas City metropolitan area. Lansing, Kansas, is located to the south.

In an average year, Leavenworth experiences 89.7 days with measurable precipitation and receives 42.97 inches (1,091 mm) of precipitation. Typically, the first fall freeze occurs by the third week of October, and the last spring freeze occurs by the second week of April. Annual snowfall averages 16.1 inches (41 cm). Measurable snowfall occurs an average of eight days per year with at least an inch of snow being received on five of those days. Snow depth of at least an inch occurs an average of 15 days a year. Severe thunderstorms sometimes occur, particularly during the spring months. These produce strong winds and, sometimes, large hail. These storms also bring the risk of tornadoes.

Leavenworth is the 10th most populated city in the Kansas City metropolitan area.

Leavenworth enjoys a diverse religious tradition stemming from its military and international military influences. In the mid to late 19th century, Leavenworth had one of the largest Jewish communities in Kansas, made up of immigrants from Europe. Leavenworth had multiple Orthodox congregations by 1870. Over generations many Jews ultimately intermarried and their descendants became Christian.

Although now Leavenworth is part of the [[Archdiocese of Kansas City, Kansas]-and there are four Roman Catholic parishes in the city--Leavenworth was originally the Roman Catholic Diocese of the Indian Territory. It stretched some 600 miles from the West bank of the Missouri River to the summit of the Rockies, and about three times that distance from the Canadian border on the North to the Red River on the South. Bishop John Baptise Miege was the first Bishop of the Leavenworth Diocese, and erected the magnificent Cathedral of the Immaculate Conception, completed in 1854 and dedicated on December 8, 1854 on the Feast of the Immaculate Conception. It remained the Cathedral until Bishop George Donnelly moved the see city of the Diocese to Kansas City Kansas in 1947.

Leavenworth is the setting for "Hurt People," a 2009 novel by Cote Smith. 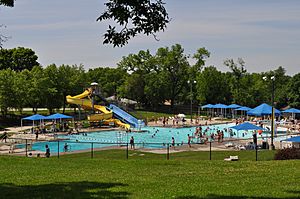 The Leavenworth Parks and Recreation Department maintains a system of more than 25 public parks as well as Riverfront Community Center, which includes an indoor cardio room and pool, and Wollman Aquatic Center. An off-leash dog park near the Dwight D. Eisenhower Veterans Affairs Medical Center was built with public donations in 2010. 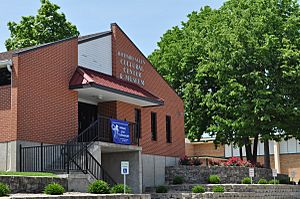 The Richard Allen Cultural Center in Leavenworth, Kansas, is a museum that includes the home of a former black U.S. Army soldier. The museum shares the histories of African Americans living on the Kansas frontier during pioneer days to the present, especially those serving in the U.S. Army.

The Richard Allen Cultural Center and Museum contains items and artifacts from the African American pioneers and members of the military, including the "Black Dignity" collection of 1870s-1920s photographs from the Mary Everhard Collection. 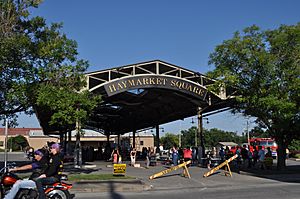 Leavenworth has a 28-block historic shopping district, which includes antique shops, restaurants, a brewery and a variety of artisan gift shops.

Leavenworth is home to the C.W. Parker Carousel Museum, listed as one of the "8 Wonders of Kansas Customs" by the Kansas Sampler Foundation. The Leavenworth County Historical Society maintains a museum at the Edward Carroll House, a Victorian-era mansion that is open to the public for touring.

Haymarket Square is a covered lot where a local farmer's market takes place from May to October.

Leavenworth enjoys a diverse religious tradition stemming from its military and international military influences. In the mid to late 19th century, Leavenworth had one of the largest Jewish communities in Kansas, made up of immigrants from Europe. Leavenworth had multiple Orthodox congregations by 1870. Over generations many Jews ultimately intermarried and their descendants became Christian.

As of 2010[update], 58.6% of the population over the age of 16 was in the labor force. 7.8% was in the armed forces, and 50.8% was in the civilian labor force with 47.0% being employed and 3.8% unemployed. The composition, by occupation, of the employed civilian labor force was: 34.5% in management, business, science, and arts; 22.8% in sales and office occupations; 23.2% in service occupations; 8.4% in natural resources, construction, and maintenance; 11.0% in production, transportation, and material moving. The three industries employing the largest percentages of the working civilian labor force were: educational services, health care, and social assistance (22.7%); public administration (15.6%); and retail trade (13.0%). The U.S. military at Fort Leavenworth is the city's largest employer, employing roughly 5,600 people, followed by Leavenworth Public Schools and the Department of Veteran Affairs Eastern Kansas Health Care System. 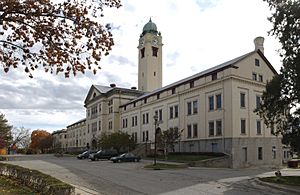 Grant Hall, the symbol of Fort Leavenworth and headquarters of the U.S. Army Combined Arms Center

According to the town's 2015 Comprehensive Annual Financial Report, the top employers in the city are: 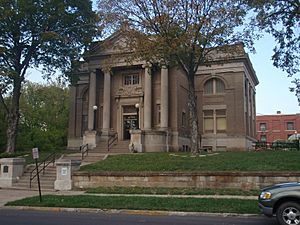 There are also three private schools in Leavenworth. The Roman Catholic Archdiocese of Kansas City in Kansas oversees Catholic school: Xavier Elementary School (Grades Pre-K-8) Immaculata High School closed at the end of the 2016-2017 school year. There is no Catholic high school in Leavenworth at this time. The Lutheran Church–Missouri Synod operates one Lutheran school, St. Paul Lutheran School (Pre-K-8).

The main campus of University of Saint Mary, a four-year, private Catholic university, is in Leavenworth. In addition, Kansas City Kansas Community College operates a satellite campus in the city.

Political activist Charles Henry Langston lived and worked here (1863-1870), assisting African-American refugees from slave states and, after the Civil War, working for black suffrage and equal rights of blacks in the West; he moved to Lawrence for the remainder of his life. General of the Army and 34th President of the United States Dwight D. Eisenhower once served at Fort Leavenworth. Both Buffalo Bill Cody and Wild Bill Hickok lived and worked in Leavenworth during its Old West frontier period.

All content from Kiddle encyclopedia articles (including the article images and facts) can be freely used under Attribution-ShareAlike license, unless stated otherwise. Cite this article:
Leavenworth, Kansas Facts for Kids. Kiddle Encyclopedia.