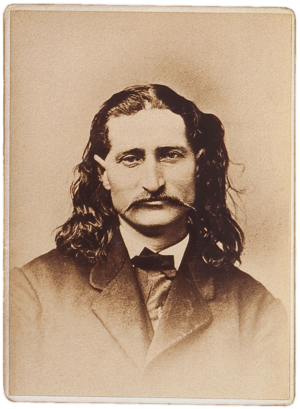 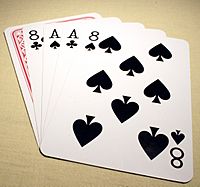 Hickok was born and raised on a farm in Homer, Illinois (now Troy Grove, Illinois). He went west at age 18 as a fugitive from justice. He worked first as a stagecoach driver, then as a lawman in the frontier territories of Kansas and Nebraska.

He fought (and spied) for the Union Army during the American Civil War. After the war, he gained fame as a scout, marksman, actor, and professional gambler. Calamity Jane claimed in her autobiography that she was married to Hickok and divorced him.

Hickok was involved in several notable shootouts. He was shot from behind and killed while playing poker in a saloon in Deadwood, Dakota Territory. The card hand he held at the time of his death is known today as poker's "Dead Man's Hand". In 1979, Hickok was inducted into the Poker Hall of Fame.

All content from Kiddle encyclopedia articles (including the article images and facts) can be freely used under Attribution-ShareAlike license, unless stated otherwise. Cite this article:
Wild Bill Hickok Facts for Kids. Kiddle Encyclopedia.