Hays is a city in and the county seat of Ellis County, Kansas, United States. The largest city in northwestern Kansas, it is the economic and cultural center of the region. It is also a college town, home to Fort Hays State University. As of the 2010 census, the city population was 20,510.

Prior to American settlement of the area, the site of Hays was located near where the territories of the Arapaho, Kiowa, and Pawnee met. Claimed first by France as part of Louisiana and later acquired by the United States with the Louisiana Purchase in 1803, it lay within the area organized by the U.S. as Kansas Territory in 1854. Kansas became a state in 1861, and the state government delineated the surrounding area as Ellis County in 1867.

In 1865, the U.S. Army established Fort Fletcher southeast of present-day Hays to protect stagecoaches traveling the Smoky Hill Trail. A year later, the Army renamed the post Fort Hays in honor of the late Brig. Gen. Alexander Hays. In late 1866, anticipating the construction of the Kansas Pacific Railway as far west as Fort Hays, a party from St. Louis, Missouri led by William Webb selected three sections of land for colonization near the fort. In June 1867, to better serve the railroad, the Army relocated Fort Hays 15 miles northwest to a site near where the railroad was to cross Big Creek, a tributary of the Smoky Hill River. Seeing a business opportunity, Buffalo Bill Cody and railroad contractor William Rose founded the settlement of Rome, Kansas near the fort's new location. Within a month, the population of Rome grew to over 2,000. Webb, meanwhile, established the Big Creek Land Company and then surveyed and platted a town site, which he named Hays City after the fort, roughly one mile east of Rome. The railroad reached Hays City soon thereafter and constructed a depot there. The railroad's arrival, combined with a cholera epidemic that hit Rome in the late summer of 1867, drove Rome businesses and residents to relocate to Hays City. Within a year, Rome was completely abandoned. As the western terminus of the railway, Hays City grew rapidly, serving as the supply point for territories to the west and southwest.

As a frontier town, Hays City experienced the kind of violence which later fueled the American myth of the Old West. Several notable figures of the Old West lived in the Hays City of this era, including George Armstrong Custer, his wife Elizabeth Bacon Custer, Calamity Jane, Buffalo Bill Cody, and Wild Bill Hickok who served a brief term as sheriff in 1869.

Hays City became the county seat of Ellis County in 1870. In the late 1860s and early 1870s, rougher elements of the populace began to leave, many following the Kansas Pacific railroad construction west to Logan County or moving to Dodge City to the south. Hays City became more civilized, especially as Volga Germans entered Ellis County in 1876, finding its land suitable for their lifestyle and the types of crops they had grown in Russia. They brought with them Turkey Red Wheat, a type of winter wheat whose cultivation contributed to the agricultural transformation of the region. Bukovina Germans began settling in the area in 1886. These groups had a significant impact on the local way of life, establishing Hays as a regional center of ethnic German culture. In 1895, the town was renamed simply as Hays.

Several disasters have struck Hays over the course of its history. In 1895, fire destroyed 60 buildings downtown. Severe floods occurred in 1907 and 1951. In 1919, three Standard Oil gasoline tanks exploded, killing eight and injuring approximately 150 people. In 1935, the city experienced violent dust storms as part of the Dust Bowl.

Hays began to modernize in the early 1900s with a power plant, waterworks, telephone exchange, and sewer system complete by 1911. Over the following decades, the city evolved into a regional economic hub. Development of oil fields in the surrounding area began in 1936 with Hays serving as a trading center and shipping point. Hays Regional Airport opened in 1961. Interstate 70 reached Hays in 1966. Today, Hays is a commercial and educational center for western Kansas.

Hays sits near the convergence of North America's humid subtropical climate (Köppen Cwa), humid continental climate (Köppen Dwa), and temperate semi-arid climate (Köppen BSk) zones and has features of all three climates. It typically experiences hot summers with variable humidity and cool winters. Due to its geographic location at a climatic boundary, severe weather is common with tornadoes a major threat, especially in the spring and early summer months. On average, January is the coldest month, and July is both the hottest and wettest month.

On average, Hays receives 23.45 inches (596 mm) of precipitation in a year with the largest share being received from May through August. The average relative humidity is 64%. There are, on average, 77 days of measurable precipitation each year. Annual snowfall averages 16.7 inches (42 cm). Measurable snowfall occurs an average of 11 days a year with at least an inch of snow being received on six of those days. Snow depth of at least an inch occurs an average of 25 days a year. Typically, the first fall freeze occurs by the second week of October, and the last spring freeze occurs by the last week of April.

There were 8,698 households of which 23.3% had children under the age of 18 living with them, 41.7% were married couples living together, 8.2% had a female householder with no husband present, 3.4% had a male householder with no wife present, and 46.7% were non-families. 33.2% of all households were made up of individuals, and 10% had someone living alone who was 65 years of age or older. The average household size was 2.25, and the average family size was 2.89.

The city government's Parks Department maintains 16 parks in the city. The largest is Frontier Park, located immediately south of downtown across the U.S. 183 bypass route from the Fort Hays State Historic Site. Divided into eastern, western, and northern sections, it includes an 18-hole disc golf course and pens which are home to a herd of American bison kept at the park since 1953. The department also maintains three baseball parks, a soccer complex, tennis courts, a roller hockey and skateboard park, and a second, 9-hole disc golf course. In addition, the Hays Recreation Commission manages a municipal swimming pool and a waterpark, Hays Aquatic Park.

An established arts community supports several galleries in the city. The Hays Arts Council operates the Hays Arts Center Gallery which displays the work of Kansas artists and sponsors exhibitions and competitions throughout the year. FHSU’s Moss-Thorns Gallery of Art, affiliated with the university’s Art Department, displays student and faculty works as well as traveling exhibits. In addition, a number of local artists manage their own galleries around the city.

The Hays Symphony Orchestra, established in 1914, is an ensemble of university, regional, and community musicians which performs in FHSU’s Beach/Schmidt Performing Arts Center. The center also hosts the university’s Encore Series, a performing arts series which consists of dramatic and musical performances throughout the year.

Hays is a regional center of German American culture due to the number of German immigrants who settled the area in the 1870s and 1880s. As of 2010, 56.5% of the city population claimed German ancestry. The city hosts several events throughout the year which celebrate this heritage including two Oktoberfests. The Midwest Deutsche Oktoberfest takes place the third week of September. Fort Hays State University and The Volga German Society hold an Oktoberfest celebration on the first or second Friday in October. In addition, Polka Fest occurs in March, and the Ellis County Historical Museum hosts German Heritage Days in April.

To celebrate Independence Day and to mark its early history as an Old West frontier town, the city hosts the annual Wild West Festival during the first week of July. The festival includes country and rock music concerts, a carnival, a parade, a fishing tournament, baseball games, and a fireworks display. On the first weekend in December, the Kansas Historical Society holds Christmas Past at Historic Fort Hays, showcasing history programs and tours of the fort with it decorated for Christmas as it was in the late 1800s. 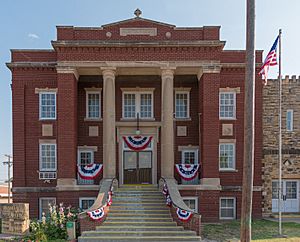 There are several museums and sites in Hays dedicated to aspects of area history. FHSU’s Sternberg Museum of Natural History features extensive collections and exhibits of fossil specimens, including an interactive diorama of life in the region during the Cretaceous period. Affiliated with the university’s Departments of Geosciences and Biology, the museum also hosts educational programs on fossil preparation and ongoing scientific research. The Ellis County Historical Society Museum, located downtown, maintains exhibits of artifacts from the area’s Old West period through its settlement by Volga and Bukovina Germans. Included in the museum complex are the Volga German Haus, a reproduction of an early Volga German settler home, and a stone chapel constructed in 1879. Southwest of Hays, the Kansas Historical Society maintains the Fort Hays State Historic Site. It consists of four of the fort’s original structures and a visitor’s center. Other sites related to the area’s frontier period include Boot Hill, the city’s earliest cemetery, and a historical marker at the site of the ill-fated town of Rome.

To capitalize on the community's Old West heritage, the local chamber of commerce promotes downtown Hays as the historic Chestnut Street District. Local businesses offer dining, shopping, and entertainment, and visitors can tour designated historical sites in the district via a self-guided walking tour.

St. Joseph's Church in Hays is listed on the National Register of Historical Places

There are 27 Christian churches in Hays, the majority of which are Protestant. That number also includes three Catholic churches, a Jehovah's Witnesses congregation, and a meetinghouse of The Church of Jesus Christ of Latter-day Saints. Hays is also home to a Baha'i community. The Hays District of the United Methodist Church, which consists of 21 counties in northwestern Kansas, is headquartered in the city.

Hays has been a setting of multiple films. The Plainsman (1936) and Wild Bill (1995), both of which dramatize the life and career of Wild Bill Hickok, are partially set in Hays during the late 1860s and early 1870s. Paper Moon (1973) is partially set in Great Depression-era Hays, and a portion of the film was shot in the city.

All content from Kiddle encyclopedia articles (including the article images and facts) can be freely used under Attribution-ShareAlike license, unless stated otherwise. Cite this article:
Hays, Kansas Facts for Kids. Kiddle Encyclopedia.