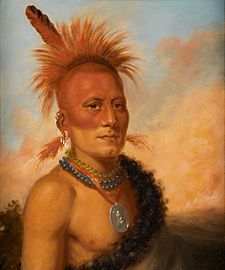 The Pawnee are a Native American Plains Indians tribe. They lived mainly in what is now Nebraska and Kansas.

Unlike other tribes of the Great Plains, they were semi-nomadic people. They were hunters and farmers. The Pawnee farmed for most of the year and lived in earth lodges. During the buffalo hunting season, they lived in tepees so they could follow the herds.

In the early 1800s their main village was on the south side of the Platte River (Nebraska).

They raised crops including beans, corn, pumpkins, squashes and sunflowers. The powerful Pawnee tribe had four individual bands. These were the Chaui (Grand), the Kitkehaki (Republican Pawnees), Pitahauerat (Tapage Pawnees) and the Skidi (Loup or Wolf Pawnees).

They were a fierce people who used war paint and tattoos to intimidate their enemies.

The Pawnee were the largest tribe to have lived in Nebraska. They were one of the earliest tribes to come to the area. Estimates are that there were between 10,000 and 12,000 Pawnee in Nebraska by 1800. They had little to fear from their enemies because they were a large tribe.

Smallpox and other diseases reduced their numbers significantly in the early 1800s.

They were finally removed to Oklahoma in the 1870s.

All content from Kiddle encyclopedia articles (including the article images and facts) can be freely used under Attribution-ShareAlike license, unless stated otherwise. Cite this article:
Pawnee people Facts for Kids. Kiddle Encyclopedia.