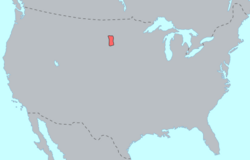 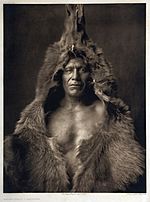 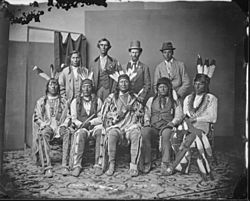 Arikara (also Sahnish,The Arikara call themselves Sahnish. Arikaree, Ree) are a group of Native Americans in North Dakota. Today they are enrolled in the federally recognized tribe the Three Affiliated Tribes of the Fort Berthold Reservation.

Sometimes called the Arikaree, or the Ree, the Arikara's name is believed to mean "horns", in reference to the ancient custom of wearing two upright bones in their hair. The name also could mean "elk people" or "corn eaters".

The Arikara language is a member of the Caddoan language family. Arikara is close to the Pawnee language, but they are not mutually intelligible. Arikara is now spoken mainly by a few elders. One of the last fluent speakers, Maude Starr, died on January 20, 2010. She was a certified language teacher who participated in Arikara language education programs.

In previous centuries, the Arikara were a semi-nomadic people who lived on the Great Plains of the United States of America for several hundred years. They lived primarily in earth lodges during the sedentary seasons. They created portable tipis as temporary shelter while traveling from their villages, or on seasonal bison hunts. They were primarily an agricultural society, whose women cultivated varieties of corn (or maize). The crop was such an important staple of their society that it was referred to as "Mother Corn".

Traditionally an Arikara family owned 30–40 dogs. The people used them for hunting and as sentries, but most importantly for transportation, before Plains tribes adopted the horse. Many of the Plains tribes had shared the use of the travois, a transportation device to be pulled by dogs. It consisted of two long poles attached by a harness at the dog's shoulders, with the butt ends dragging behind the animal; midway, a ladder-like frame, or a hoop made of plaited thongs, was stretched between the poles; it held loads that might exceed 60 pounds. Women used dog-pulled travois to haul firewood or infants. These were also used for meat transport during the seasonal hunts; a single dog could pull a quarter of a bison.

The tribe suffered a high rate of fatalities from smallpox epidemics in the late 18th century, which so reduced their population as to disrupt their social structure. Due to their reduced numbers, the Arikara started to live closer to the Mandan and Hidatsa tribes in the same area for mutual protection. They migrated gradually from present-day Nebraska and South Dakota into North Dakota in response to pressure from other tribes, especially the Sioux, and European-American settlers. During the Black Hills War, in 1876 some Arikara served as scouts for Lt. Col. George Armstrong Custer in the Little Bighorn Campaign.

The three tribes are settled on the Fort Berthold reservation in North Dakota.

All content from Kiddle encyclopedia articles (including the article images and facts) can be freely used under Attribution-ShareAlike license, unless stated otherwise. Cite this article:
Arikara Facts for Kids. Kiddle Encyclopedia.