A pumpkin is a gourd. They are usually orange, but they can also be white. Pumpkins are spheres or stretched-out spheres.

It also has a few noted medicinal use, which are traditionally used in India.

Pumpkins, like other squash, originated in northeastern Mexico and southern United States. The oldest evidence were pumpkin fragments dated between 7,000 and 5,500 BC found in Mexico. Pumpkin fruits are a type of botanical berry known as a pepo. 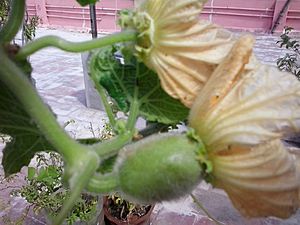 Traditional C. pepo pumpkins generally weigh between 3 and 8 kilograms (6 and 18 lb), though the largest cultivars (of the species C. maxima) regularly reach weights of over 34 kg (75 lb).

The color of pumpkins derives from orange carotenoid pigments, including beta-cryptoxanthin, alpha and beta carotene, all of which are provitamin A compounds converted to vitamin A in the body.

All pumpkins are winter squash: mature fruit of certain species in the genus Cucurbita. Characteristics commonly used to define "pumpkin" include smooth and slightly ribbed skin, and deep yellow to orange color. Circa 2005, white pumpkins had become increasingly popular in the United States. Other colors, including dark green (as with some oilseed pumpkins), also exist.

Pumpkins are grown all around the world for a variety of reasons ranging from agricultural purposes (such as animal feed) to commercial and ornamental sales. Of the seven continents, only Antarctica is unable to produce pumpkins. The traditional American pumpkin used for jack-o-lanterns is the Connecticut Field variety. 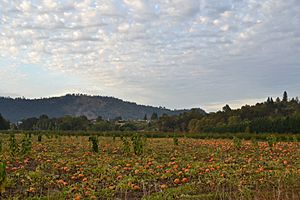 A pumpkin patch in Winchester, Oregon

As one of the most popular crops in the United States, in 2017 over 680,000,000 kilograms (1.5 billion pounds) of pumpkins were produced. The top pumpkin-producing states include Illinois, Indiana, Ohio, Pennsylvania, and California.

According to the Illinois Department of Agriculture, 95% of the U.S. crop intended for processing is grown in Illinois. Nestlé, operating under the brand name Libby's, produces 85% of the processed pumpkin in the United States, at their plant in Morton, Illinois. In the fall of 2009, rain in Illinois devastated the Nestlé crop, which combined with a relatively weak 2008 crop depleting that year's reserves resulted in a shortage affecting the entire country during the Thanksgiving holiday season. Another shortage, somewhat less severe, affected the 2015 crop. The pumpkin crop grown in the western United States, which constitutes approximately 3-4% of the national crop, is primarily for the organic market.

Pumpkins are a warm-weather crop that is usually planted in early July. The specific conditions necessary for growing pumpkins require that soil temperatures 8 centimetres (3 in) deep are at least 15.5 °C (60 °F) and that the soil holds water well. Pumpkin crops may suffer if there is a lack of water or because of cold temperatures (in this case, below 18 °C or 65 °F; frost can be detrimental), and sandy soil with poor water retention or poorly drained soils that become waterlogged after heavy rain. Pumpkins are, however, rather hardy, and even if many leaves and portions of the vine are removed or damaged, the plant can very quickly re-grow secondary vines to replace what was removed.

Pumpkins produce both a male and female flower; they must be fertilized, usually by bees. Pumpkins have historically been pollinated by the native squash bee Peponapis pruinosa, but this bee has declined, probably at least in part to pesticide (imidacloprid) sensitivity. Ground-based bees such as squash bees and the eastern bumblebee are better suited to handle the larger pollen particles that pumpkins create, but today most commercial plantings are pollinated by hives of honeybees, which also allows the production and sale of honey that the bees produce from the pumpkin pollen. One hive per acre (4,000 m2 per hive, or 5 hives per 2 hectares) is recommended by the U.S. Department of Agriculture. If there are inadequate bees for pollination, gardeners often have to hand pollinate. Inadequately pollinated pumpkins usually start growing but abort before full development. 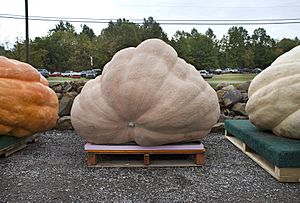 "Giant pumpkins" are a large squash (within the group of common squash Cucurbita maxima) that can exceed 1 tonne in weight. The variety arose from the large squash of South America through the efforts of botanical societies and enthusiast farmers.

Pumpkin pie is a popular way of preparing pumpkin.

Pumpkins are very versatile in their uses for cooking. Most parts of the pumpkin are edible, including the fleshy shell, the seeds, the leaves, and even the flowers. In the United States and Canada, pumpkin is a popular Halloween and Thanksgiving staple. Pumpkin purée is sometimes prepared and frozen for later use. 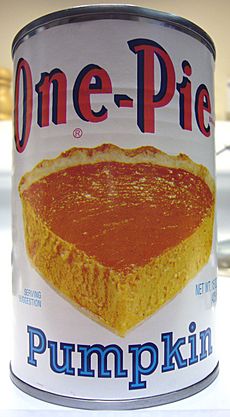 A can of puréed pumpkin, typically used as the main ingredient in pumpkin pie

When ripe, the pumpkin can be boiled, steamed, or roasted. In its native North America, pumpkins are a very important, traditional part of the autumn harvest, eaten mashed and making its way into soups and purées. Often, it is made into pie, various kinds of which are a traditional staple of the Canadian and American Thanksgiving holidays. In Canada, Mexico, the United States, Europe and China, the seeds are often roasted and eaten as a snack.

Pumpkins that are still small and green may be eaten in the same way as squash or zucchini. In the Middle East, pumpkin is used for sweet dishes; a well-known sweet delicacy is called halawa yaqtin. In the Indian subcontinent, pumpkin is cooked with butter, sugar, and spices in a dish called kadu ka halwa. Pumpkin is used to make sambar in Udupi cuisine. In Guangxi province, China, the leaves of the pumpkin plant are consumed as a cooked vegetable or in soups. In Australia and New Zealand, pumpkin is often roasted in conjunction with other vegetables. In Japan, small pumpkins are served in savory dishes, including tempura. In Myanmar, pumpkins are used in both cooking and desserts (candied). The seeds are a popular sunflower seed substitute. In Thailand, small pumpkins are steamed with custard inside and served as a dessert. In Vietnam, pumpkins are commonly cooked in soups with pork or shrimp. In Italy, it can be used with cheeses as a savory stuffing for ravioli. Also, pumpkin can be used to flavor both alcoholic and nonalcoholic beverages.

In the southwestern United States and Mexico, pumpkin and squash flowers are a popular and widely available food item. They may be used to garnish dishes, and they may be dredged in a batter then fried in oil. Pumpkin leaves are a popular vegetable in the Western and central regions of Kenya; they are called seveve, and are an ingredient of mukimo, respectively, whereas the pumpkin itself is usually boiled or steamed. The seeds are popular with children who roast them on a pan before eating them. Pumpkin leaves are also eaten in Zambia, where they are called chibwabwa and are boiled and cooked with groundnut paste as a side dish.

Other than the traditionally defined pumpkin, commercially canned "pumpkin" purée and pumpkin pie fillings may contain other winter squashes, such as butternut squash. 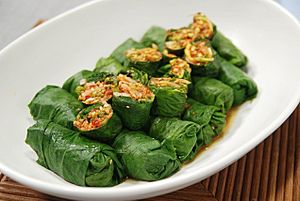 Pumpkin leaves, usually of C. moschata varieties, are eaten as a vegetable in Korean cuisine.

In various parts of India and Madheshis prepare saag and kachri/pakoda of the leaves and flowers. 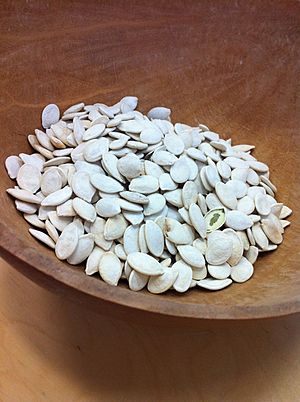 Pumpkin seeds, also known as pepitas, are edible and nutrient-rich. They are about 1.5 cm (0.5 in) long, flat, asymmetrically oval, light green in color and usually covered by a white husk, although some pumpkin varieties produce seeds without them. Pumpkin seeds are a popular snack that can be found hulled or semi-hulled at most grocery stores. Per ounce serving, pumpkin seeds are a good source of protein, magnesium, copper and zinc. 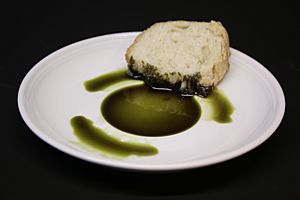 Pumpkin seed oil, a thick oil pressed from roasted pumpkin seeds, appears red or green in color depending on the oil layer thickness, container properties and hue shift of the observer's vision. When used for cooking or as a salad dressing, pumpkin seed oil is generally mixed with other oils because of its robust flavor. Pumpkin seed oil contains fatty acids, such as oleic acid and alpha-linolenic acid.

Canned pumpkin is often recommended by veterinarians as a dietary supplement for dogs and cats that are experiencing certain digestive ailments such as constipation, diarrhea, or hairballs. The high fiber content aids proper digestion.

Raw pumpkin can be fed to poultry, as a supplement to regular feed, during the winter to help maintain egg production, which usually drops off during the cold months.

Pumpkins have been used as folk medicine by Native Americans to treat intestinal worms and urinary ailments, and this Native American remedy was adopted by American doctors in the early nineteenth century as an anthelmintic for the expulsion of worms.Template:Qualify evidence In Germany and southeastern Europe, seeds of C. pepo were also used as folk remedies to treat irritable bladder and benign prostatic hyperplasia.Template:Qualify evidence In China, C. moschata seeds were also used in traditional Chinese medicine for the treatment of the parasitic disease schistosomiasis and for the expulsion of tape worms.Template:Qualify evidence Chinese studies have found that a combination of pumpkin seed and areca nut extracts was effective in the expulsion of Taenia spp. tapeworms in over 89% of cases. 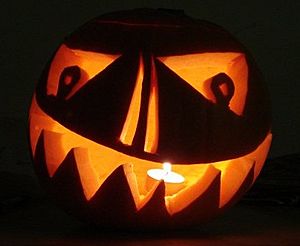 A pumpkin carved into a jack-o'-lantern for Halloween

Pumpkins are commonly carved into decorative lanterns called jack-o'-lanterns for the Halloween season. Traditionally Britain and Ireland would carve lanterns from vegetables, particularly the turnip, mangelwurzel, or swede, they continue to be popular choices today as carved lanterns in Scotland and Northern Ireland, although the British purchased a million pumpkins for Halloween in 2004.

The practice of carving pumpkins for Halloween originated from an Irish myth about a man named "Stingy Jack". The turnip has traditionally been used in Ireland and Scotland at Halloween, but immigrants to North America used the native pumpkin, which are both readily available and much larger – making them easier to carve than turnips. Not until 1837, does jack-o'-lantern appear as a term for a carved vegetable lantern, and the carved pumpkin lantern association with Halloween is recorded in 1866.

In the United States, the carved pumpkin was first associated with the harvest season in general, long before it became an emblem of Halloween. In 1900, an article on Thanksgiving entertaining recommended a lit jack-o'-lantern as part of the festivities that encourage kids and families to join together to make their own jack-o'-lanterns.

Association of pumpkins with harvest time and pumpkin pie at Canadian and American Thanksgiving reinforce its iconic role. Starbucks turned this association into marketing with its pumpkin spice latte, introduced in 2003. This has led to a notable trend in pumpkin and spice flavored food products in North America. This is despite the fact that North Americans rarely buy whole pumpkins to eat other than when carving jack-o'-lanterns. Illinois farmer Sarah Frey is called "the Pumpkin Queen of America" and sells around five million pumpkins annually, predominantly for use as lanterns.

Pumpkin chunking is a competitive activity in which teams build various mechanical devices designed to throw a pumpkin as far as possible. Catapults, trebuchets, ballistas and air cannons are the most common mechanisms. Some pumpkin chunkers breed and grow special varieties of pumpkin under specialized conditions to improve the pumpkin's chances of surviving a throw. 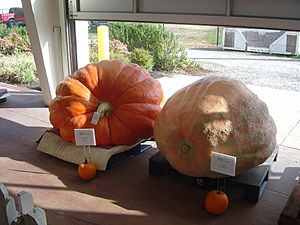 "Giant pumpkins" are orange variants of the giant squash, Cucurbita maxima. Growers of these "pumpkins" often compete to see whose pumpkins are the most massive. Festivals are often dedicated to the pumpkin and these competitions.

In the United States, the town of Half Moon Bay, California, holds an annual Art and Pumpkin Festival, including the World Champion Pumpkin Weigh-Off.

There is a connection in folklore and popular culture between pumpkins and the supernatural, such as:

All content from Kiddle encyclopedia articles (including the article images and facts) can be freely used under Attribution-ShareAlike license, unless stated otherwise. Cite this article:
Pumpkin Facts for Kids. Kiddle Encyclopedia.