Kids Encyclopedia Facts
"Half Moon Bay" redirects here. For the bay in California, see Half Moon Bay (California). For other uses, see other uses (disambiguation).

Half Moon Bay is a coastal city in San Mateo County, California, United States. Its population was 11,324 as of the 2010 census. Immediately at the north of Half Moon Bay is the Pillar Point Harbor and the unincorporated community of Princeton-by-the-Sea. The urban area had a population of 20,713 at the same census.

A valley floor outside the city 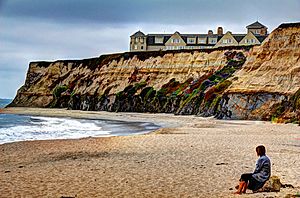 Ritz-Carlton Hotel in Half Moon Bay.

The community began to develop in the 1840s as the first real town in San Mateo County. Known originally as San Benito, the town was renamed Spanishtown and attracted a thriving fishing industry in addition to its continued importance to coastal agriculture. Spanishtown became a racially diverse community, settled by Canadians, Chinese, English, Germans, Irish, Mexicans, Italians, Scots, Portuguese, and Pacific Islanders. Regular stagecoach service was established with San Mateo; coaches also served the communities of Purissima, Lobitos, and San Gregorio. Levy Brothers opened a department store in downtown Half Moon Bay. Spanishtown was officially renamed Half Moon Bay in 1874. 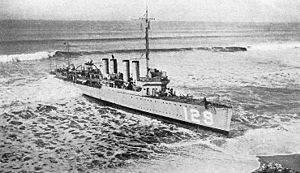 The USS DeLong, run aground

The area grew very slowly, even after the Ocean Shore Railroad began serving the community in 1907. The construction of Pedro Mountain Road in 1914 provided better access to San Francisco and probably contributed to the demise of the railroad by 1920. The USS DeLong ran aground at Half Moon Bay 1 December 1921. During Prohibition "rum runners" took advantage of dense fog and hidden coves in the area to serve a number of roadhouses and inns, some of which operate today as restaurants. Real growth in the area came after World War II with the construction of numerous subdivisions, eventually leading to the incorporation of Half Moon Bay in 1959. The city preserves a historic downtown district which includes historic buildings dating as far back as 1869.

In 2008, financial setbacks endangered the city's viability. The economic crisis severely affected tourism, which generates the most revenue, and that just at the time when the city had finalized a $18 million settlement over a property lawsuit. As the municipal budget was typically $14 million or less, city fathers had issued bonds with annual payments of approximately $1 million over 25 years. As a result of these combined fiscal obstacles, the threat of bankruptcy was very real. Dozens of meetings were held in order to decide where the budget should be cut and finally 75% of municipal employees were laid off and replaced with contract workers. Also, employee contributions toward retirement benefits were raised. However, the city council sought to regain the money paid in the settlement, believing that it should have been paid by the city's insurers. A lawsuit against the insurers was decided in 2013 and the insurer ordered to pay more than $13 million to the city; the costs of the lawsuit had been partially covered by the Association of Bay Area Governments.

Since then, the City's finances have shown great improvement. The City was able to retire the first of its two 30-year Judgment Obligation Bonds (2009A Series Bonds) a full 20 years early. The early retirement will save the City over $426,000 in annual General Fund expenses starting in 2015-16. The second set of Judgment Obligation Bonds (2009B Series Bonds) will be retired in 2019, 18 years ahead of schedule with a combination of annual payments from the City Budget and funds already on deposit with the Bond Trustee obtained in settlements with two of the City’s insurance carriers. The early retirement of the 2009B Series Bonds will reduce the General Fund budget expenditure by almost $700,000 per year and will provide funding for the annual debt service on the Lease Revenue Bonds for the New Half Moon Bay Library.

As of the publication of the Fiscal Year 2015/16 Budget the General Fund budget is balanced and has a structural surplus of $4.0 Million. The General Fund budget is also projected to have a significant structural surplus (revenues exceeding operating expenses) in the following four years according to revenue and expense projections from the City’s Finance Department. This means that the City will be able to fully fund the cost of day-to-day operations and services in Half Moon Bay over the next five years with a healthy annual surplus that can be used towards the cost of desired Capital Improvement Program projects and other needs.

It is situated on a bay of the same name. Major local industries include agriculture (houseplants, floriculture, Christmas trees, pumpkins, artichokes), fishing, and tourism. Historically, Half Moon Bay had been known as San Benito and Spanishtown.

A popular spot at Half Moon Bay is the 'Jetty,' or as it is sometimes called, 'The Breakwater.' This is a man-made break with unusual waves shaped by reflections from the breakwater at Pillar Point Harbor. Streams in Half Moon Bay include Frenchmans Creek, Pilarcitos Creek and Naples Creek.

Half Moon Bay usually has mild weather throughout the year. Under the Köppen climate classification, Half Moon Bay has a cool summer mediterranean climate (Köppen Csb). Hot weather is rare; the average annual days with highs of 90 °F (32 °C) or higher is only 0.4 days. Cold weather is also rare with an annual average of 2.5 days with lows of 32 °F (0 °C) or lower. Typical of Northern California, most of the rain falls from November to April. The normal annual precipitation is 26.2 inches (665 mm). Snowfall along the coast in Half Moon Bay has never been measurable; however, snow flurries were observed on December 12, 1972, and February 5, 1976. There is often fog and overcast during the night and morning hours, usually clearing to offshore during the afternoon. Persistent sea breezes help to moderate the climate along the coast; farther from the ocean, in places such as Pilarcitos Creek, days are often warmer and nights cooler than on the coast. For the 37th parallel north, the mild summer temperatures of Half Moon Bay are unmatched across the board. Relatively nearby inland cities see significantly warmer temperatures at the same time. In spite of the low latitude and strong maritime influence, nights remain very cool even in summer.

There were 4,004 households out of which 30.9% had children under the age of 18 living with them, 58.3% were married couples living together, 7.2% had a female householder with no husband present, and 30.7% were non-families. 23.1% of all households were made up of individuals and 9.1% had someone living alone who was 65 years of age or older. The average household size was 2.75 and the average family size was 3.20. 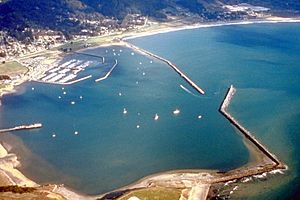 Aerial view of Pillar Point Harbor. View is to the east.

The Pillar Point Harbor at the northern edge of Half Moon Bay offers a protected landing for boats and provides other marine infrastructure. In the late 1980s a new master plan was developed for the Harbor. A variety of fish species have been identified in the harbor area. The most abundant fish include flatfish, particularly the speckled sanddab (Citharichthys stigmaeus) and the commercially important English sole (Parophrys vetulus), several species of rockfish (Sebastes sp.) with boccacio (S. paucispinis) most abundant, many members of the surfperch family, the most abundant being shiner (Cymanogaster aggregata) and dwarf surfperches (Micrometrus minimus), and the commercially important Pacific herring (Clupea harengus). Smaller populations of many other species, including significant commercial or sport species such as various surfperch, flatfish including halibut (Paralichthys californicus), lingcod (Ophiodon elongatus), and cabezon (Scoraenichthys marmotarus) also are found in the harbor during the summer. Abundant winter species include starry flounder (Platichthys stellatus) and topsmelt (Atherinops affinis). At Pillar Point Harbor, fishermen sell crab and fish catches straight off their boats at discount prices directly to the public, and restaurants will fillet the fish for purchasers. 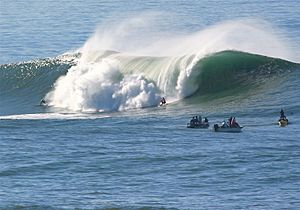 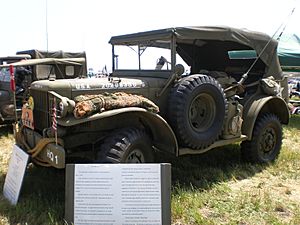 The city has four sites listed at the National Register of Historic Places: the Methodist Episcopal Church at Half Moon Bay, the William Adam Simmons House, the Robert Mills Dairy Barn, and the James Johnston House.

Reflecting the numerous artists in the area, there is an active artist's collective, Colony of Coastside Artists, downtown has several galleries, and there are many classes and workshops available locally. Half Moon Bay also hosts an annual Art and Pumpkin Festival in October.

The remnants of the village of Purissima, perhaps the only ghost town in San Mateo County, are four miles (6 km) south of the city, near the junction of State Route 1 and Verde Road.

The Ritz-Carlton hotel chain operates a hotel there, and is a major employer. The hotel was used as the wedding venue for the movie American Wedding.

At the north edge of the bay is the big wave surf area, Mavericks, off Pillar Point, where surfers challenge waves over 50 feet (15 m) tall.

Montara Mountain, located North of Half Moon Bay, is a popular outdoor recreation spot, and home to the old Highway 1.

Seagoing vessels at Pillar Point Harbor will, on occasion, sell fresh seafood while docked at the piers. The airport hosts an annual benefit event in April, Pacific Coast Dream Machines, which features aircraft and automobiles.

The region around Half Moon Bay contains several state parks and beaches, including:

The World War II United States Navy seaplane tender USS Half Moon (AVP-26) was named for Half Moon Bay, and retained the name when serving as a United States Coast Guard weather reporting ship USCGC Half Moon for more than 20 years after the war.

The album Half Moon Bay was recorded by jazz pianist Bill Evans in 1973 at the Bach Dancing and Dynamite Society in Half Moon Bay.

Primary road access is via State Route 1 (the Cabrillo Highway) from the north and south, and State Route 92 from the east.

The city is served by Half Moon Bay Airport.

SamTrans buses #294 & #17 provide service to Half Moon bay from the Hillsdale Caltrain station in San Mateo and Linda Mar in Pacifica respectively.

All content from Kiddle encyclopedia articles (including the article images and facts) can be freely used under Attribution-ShareAlike license, unless stated otherwise. Cite this article:
Half Moon Bay, California Facts for Kids. Kiddle Encyclopedia.