San Gregorio (Spanish for "St. Gregory") is an unincorporated community in San Mateo County, California, with a population of 214 people. It is located in the San Francisco Bay Area, south of Half Moon Bay. Just east of Highway 1, it is one mile (1.6 km) inland on Highway 84, from San Gregorio State Beach. It is also located 7 (11.4 km) north of Pescadero via Stage Road and 8 miles (12.8 km) west of La Honda via SR 84. 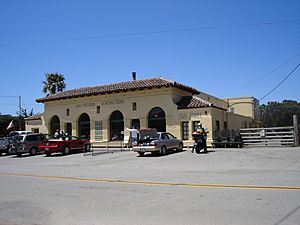 A National Weather Service cooperative weather station has been in operation in San Gregorio since June 1, 1954. San Gregorio enjoys mild weather throughout the year, except for some remarkably chilly mornings, even in the summer. Fog and low overcast are common in the night and morning hours, too, especially in the summer. The fog usually clears to the shoreline by the afternoon. Temperatures are often much warmer just a few miles inland than on the coast. Most of the rainfall falls from November through April.

The first European land exploration of Alta California, the Spanish Portolà expedition, passed through the area on its way north, camping for three days near today's San Gregorio, October 24–26, 1769. Franciscan missionary Juan Crespi noted in his diary, "This is a fine place, with good lands and an abundance of water, where a good mission could be placed". No mission was ever established here, however. The string of Spanish Missions established over the next 50 years followed a more inland route through San Jose. During the Mexican era, the area was part of Rancho San Gregoria. 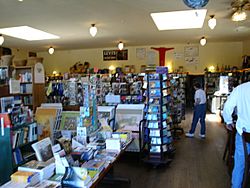 Named after Pope Gregory I (Saint Gregory the Great). San Gregorio was a booming town in the 1850s, when wealthy San Franciscans would travel to the San Gregorio House by stagecoach to enjoy fishing, hunting, sea bathing, and boat races. The building still stands, but is no longer a functioning hotel. In the nineteenth century, a Chinese community had lived along the creek which runs through San Gregoria, however the buildings of the former community were washed away due to heavy rains. The San Gregorio General Store has been operating since 1889. The original stagecoach stop stands across Highway 84 from the store. In 1915, the community was home to seven cheese factories. San Gregorio has been the site of several film locations and television show episode scenes.

All content from Kiddle encyclopedia articles (including the article images and facts) can be freely used under Attribution-ShareAlike license, unless stated otherwise. Cite this article:
San Gregorio, California Facts for Kids. Kiddle Encyclopedia.