Pescadero (Spanish for "Fishmonger") is an unincorporated town and census-designated place (CDP) in San Mateo County, California, two miles (3 km) east of State Route 1 and Pescadero State Beach. The town is 14.4 miles (23.2 km) south of Half Moon Bay. The ZIP Code is 94060 and the community is inside area code 650. The population was 595 at the 2020 census. 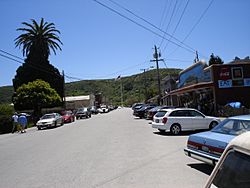 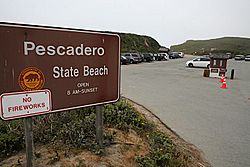 Pescadero is a farming and ranching community near the Pescadero Marsh, a wildlife refuge. Pescadero Creek, the longest stream in San Mateo County, is an annual creek that empties into the Pacific Ocean near the town.

Many of the buildings in town date from the 19th Century. Pescadero is situated near the Pacific Ocean about 17 miles (27 km) south of Half Moon Bay and about 34 miles (55 km) north of Santa Cruz.

Pescadero is located on the Rancho Pescadero Mexican land grant; former Mission Santa Cruz pasture given to Juan José Gonzalez in 1833. Alexander Moore (1823–1902), an American pioneer, built his home in Pescadero Valley in 1853. The rich, fertile soil of the valley had attracted other settlers, and in the 1860s Pescadero was a prosperous town surrounded by farms and lumber mills.

According to a guidebook published by the California Coastal Commission, the residents of Pescadero recovered a large quantity of white paint from the 1853 wreck of the clipper ship Carrier Pigeon at Pigeon Point. The paint was "used liberally on all the town's buildings", and residents have since maintained the tradition of painting their houses white. [However, other sources credit the 1896 wreck of the steamer Columbia as the source of the white paint.]

An article in the Wells Fargo Messenger states that a stagecoach salvaged from the Carrier Pigeon was laboriously hoisted up the cliffs onto the road, and put into service within a week. The coach, built in Concord, New Hampshire, carried passengers and freight on the Pescadero road for the Wells Fargo Company for forty years, and, in 1914, was listed among the company's prized possessions.

Another tale relates that an Irishman named John Daly, who was employed driving pigs from Santa Cruz to Alexander Moore's Pescadero ranch, discovered some lumps of coal from the steamer Sea Bird's cargo on the beach at Ano Nuevo. Mr. Daly endeavored to parley his discovery into money which he might spend on whiskey. Since coal deposits had been rumored to exist in the area, Mr. Daly proceeded with his lumps of coal to Santa Cruz, announcing to Captain Brannan and three others that he'd discovered a coal mine at Gazos Creek. After collecting his monetary reward, he led the four men up Gazos Creek in search of the alleged coal outcropping, with the intention of escaping and leaving his benefactors behind empty-handed. However, Captain Brannan, who was armed, managed to capture Daly and extracted a confession. Daly was administered a whipping on the spot and later fled the area.

Intel co-founder Gordon E. Moore grew up in Pescadero and resided there until he was about 10 years of age. His childhood home still stands (Lunasea) as does the barn he played in (Pescadero Creekside Barn).

Located at the confluence of Pescadero and Butano Creeks, the area known as Pescadero Marsh has for decades been a thriving habitat for both migratory and native wildlife. Besides being a refuge and nesting ground for wintering waterfowl, the Marsh ia a critical spawning area and nursery for coho salmon, steelhead trout, tidewater goby, and many other threatened or endangered fish, amphibian, and reptile species.

Due to many causes, both natural and man-made, the health of Pescadero Marsh is deteriorating rapidly. Anoxic water conditions result in annual "die-offs" of hundreds of juvenile fish, crabs, and other species. As water levels fluctuate, many species are cut off from supportive habitat, and the entire eco-system degrades.

Since 1998 concerned citizens and other wildlife agencies have repeatedly asked California State Parks to take immediate corrective action. The Parks department has moved to request further studies. Meanwhile, native species populations in the marsh have reached critically low levels. According to a study by Dr. Jerry Smith, San Jose State Professor, estimates in 1985 showed that 10,000 steelhead were rearing in the lagoon. As of 2008, 750 steelhead were counted in the same area.

All content from Kiddle encyclopedia articles (including the article images and facts) can be freely used under Attribution-ShareAlike license, unless stated otherwise. Cite this article:
Pescadero, California Facts for Kids. Kiddle Encyclopedia.