Pigeon Point Light Station or Pigeon Point Lighthouse is a lighthouse built in 1871 to guide ships on the Pacific coast of California. It is the tallest lighthouse (tied with Point Arena Light) on the West Coast of the United States. It is still an active Coast Guard aid to navigation. Pigeon Point Light Station is located on the coastal highway (State Route 1), 5 miles (8 km) south of Pescadero, California, between Santa Cruz and San Francisco. The 115-foot (35 m), white masonry tower, resembles the typical New England structure. Because of its location and ready access from the main highway, Pigeon Point entertains many public visitors.

The Pigeon Point Lighthouse is also a logo of E. W. Scripps Company. 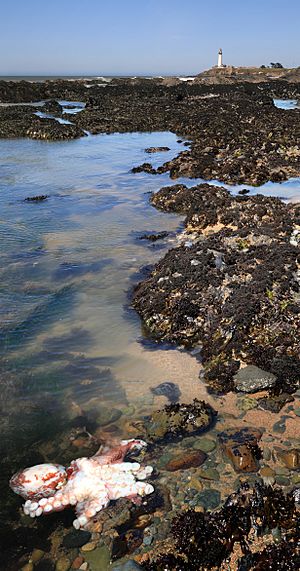 Pigeon Point Lighthouse is one of the most picturesque lighthouses on the Pacific coast. The tower stands on a rocky promontory and has long been a landmark for ships approaching San Francisco Bay from the south. This headland, and hence the lighthouse, took its name from the ship Carrier Pigeon that wrecked here in 1853.

The lantern room of the tower is no longer equipped with the original first-order, 1000-watt Fresnel lens. No longer illuminated for demonstration purposes, the lens has 24 flash panels, is composed of 1008 hand-polished lenses and prisms and is capable of producing over 500,000 candlepower illumination. It was manufactured by the Henry-LePaute company in Paris, France, and was first lit at Pigeon Point at sunset on November 15, 1872.

Originally the tower was equipped with a lamp that burned refined lard oil (pig fat). In 1888, that lamp was replaced with a mineral oil (kerosene) lamp. To produce Pigeon Point's assigned characteristic of one white flash of light every ten seconds, the one (1) ton lens rotated one time every four minutes. When observed from a distance, this resulted in the appearance of one white flash of light every ten seconds. The lens rotation was originally powered by a clockworks and 45 pounds (20 kg) weight. In 1926 the lighthouse was provided with electricity. Modern innovations were incorporated and the kerosene IOV lamp was replaced by a 1000 watt bulb, the clockworks by an electric motor and an electrically operated fog signal was eventually installed. The lighthouse has been designated California Historical Landmark number 930. In 1972, the United States Coast Guard mounted a 24-inch (610 mm) aerobeacon on the front of the tower (now replaced by a smaller beacon) and officially retired the Fresnel lens from regular duty. The First order Fresnel lens is no longer lit to celebrate special occasions, such as the annual lighting of the lens, which usually occurred in mid-November (closest Saturday to November 15) the date of the original first lighting in 1872. The lens was removed from the top of the tower in November 2011, to now be displayed in the fog signal building, adjacent to the base of the lighthouse. The light outside the lens room, mounted on a small verandah at the top of the 100-foot (30 m) tower, rotating with six beams, is still an active aid to navigation. Updated information, garnered from the recent lens removal crew, has produced new numbers for the weight of the lens...long reported to be four tons. In actuality that figure was the complete shipping weight of the lens and its rotating clock works. The correct figures are as follows: lens weight, one (1) ton; the clock works, one (1) ton; and the seventy-eight (78) wooden shipping crates to contain such, two (2) tons; total, therefore, being the reported four tons.

The first order fresnel lens of the Pigeon Point Lighthouse originally came from the Cape Hatteras Lighthouse, which has the same lens characteristic. Following the deactivation of the original tower in 1870, the lens, which had only been installed in 1863 was removed and put into storage. Shortly thereafter in 1871 it was shipped to the west coast to be installed in the new lighthouse.

The tower has been closed to tours since December 2001 because of the collapse of brickwork supporting outside access metal walkways on the top of the structure. Cast iron was used rather than steel with the result being that cast iron absorbs water rather than repelling it like steel, thus the walkways are severely rusted, as are the major binding ring bands at the base of the tower. The California State Park system has promised repairs, but it is estimated that even if funds were available, it would be seven to ten years before the repairs would be completed. In July, 2010, Rep. Anna G. Eshoo (D-Palo Alto) stated that of the $3.4 million she requested for her district through the Fiscal Year 2011 Interior and Environment Appropriations Act, $250,000 will be allocated to restore the upper portion of the lighthouse.

The restored lighthouse keepers' housing has, since the mid-1960s, also served as a youth hostel for travelers. The hostel is operated by HI USA, a non profit organization devoted to helping the young gain a greater understanding of the world and its people through hostelling. The four three-bedroom houses north of the lighthouse have overnight lodging for groups and individual travelers of all ages. Each house has male or female bunk rooms, as well as private room options. Hostel guests from all over the world share kitchens and living spaces set up to facilitate intercultural exchange. An outdoor hot tub can be rented in the evenings. 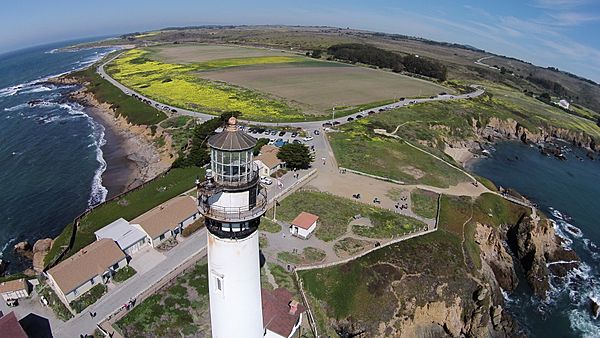 All content from Kiddle encyclopedia articles (including the article images and facts) can be freely used under Attribution-ShareAlike license, unless stated otherwise. Cite this article:
Pigeon Point Lighthouse Facts for Kids. Kiddle Encyclopedia.