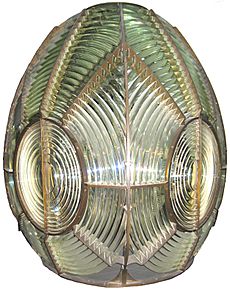 A Fresnel lens is an optical lens, which was originally developed for Lighthouses. It is named after its inventor, French physicist Augustin-Jean Fresnel. The name is pronounced /freɪˈnɛl/ (fray-NELL), the 's' is silent. Before Fresnel, Buffon and Condorcet proposed a similar design, as a way to make large burning lenses.

The design allows the construction of lenses of large aperture and short focal length without the weight and volume of material that would be required in conventional lens design. Compared to earlier lenses, the Fresnel lens is much thinner. More light can pass through. Lighthouses that use these kind of lenses can be seen from farther away. 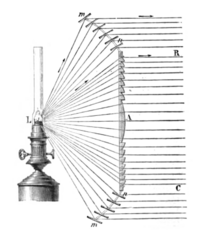 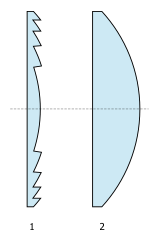 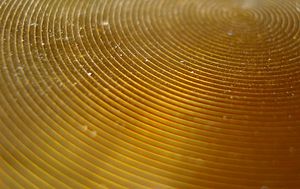 The Fresnel lens reduces the amount of material required compared to a conventional lens by dividing the lens into a set of concentric annular sections. An ideal Fresnel lens would have infinitely many such sections. In each section, the overall thickness is decreased compared to an equivalent simple lens. This effectively divides the continuous surface of a standard lens into a set of surfaces of the same curvature, with stepwise discontinuities between them.

In some lenses, the curved surfaces are replaced with flat surfaces, with a different angle in each section. Such a lens can be regarded as an array of prisms arranged in a circular fashion, with steeper prisms on the edges, and a flat or slightly convex center. In the first (and largest) Fresnel lenses, each section was actually a separate prism. 'Single-piece' Fresnel lenses were later produced, being used for automobile headlamps, brake, parking, and turn signal lenses, and so on. In modern times, computer-controlled milling equipment (CNC) might be used to manufacture more complex lenses.

Fresnel lens design allows a substantial reduction in thickness (and thus mass and volume of material), at the expense of reducing the imaging quality of the lens, which is why precise imaging applications such as photography usually still use larger conventional lenses.

Fresnel lenses are usually made of glass or plastic; their size varies from large (old historical lighthouses, meter size) to medium (book-reading aids, OHP viewgraph projectors) to small (TLR/SLR camera screens, micro-optics). In many cases they are very thin and flat, almost flexible, with thicknesses in the 1 to 5 mm (0.039 to 0.197 in) range.

Modern Fresnel lenses usually consist of all refractive elements. However many of the lighthouses have both refracting and reflecting elements, as shown in the photographs and diagram. That is, the outer elements are sections of reflectors while the inner elements are sections of refractive lenses. Total internal reflection was often used to avoid the light loss in reflection from a silvered mirror. 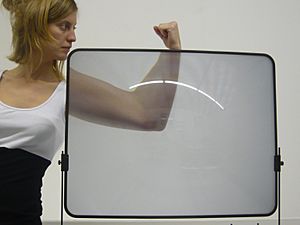 A plastic Fresnel lens sold as a TV-screen enlarging device 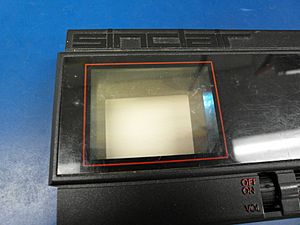 The Fresnel lens used in the Sinclair FTV1 portable CRT TV, which enlarges the vertical aspect of the display only

Fresnel lenses are used in left-hand-drive European lorries entering the UK and Republic of Ireland (and vice versa, right-hand-drive Irish and British trucks entering mainland Europe) to overcome the blind spots caused by the driver operating the lorry while sitting on the wrong side of the cab relative to the side of the road the car is on. They attach to the passenger-side window.

Another automobile application of a Fresnel lens is a rear view enhancer, as the wide view angle of a lens attached to the rear window permits examining the scene behind a vehicle, particularly a tall or bluff-tailed one, more effectively than a rear-view mirror alone.

Multi-focal Fresnel lenses are also used as a part of retina identification cameras, where they provide multiple in- and out-of-focus images of a fixation target inside the camera. For virtually all users, at least one of the images will be in focus, thus allowing correct eye alignment.

Fresnel lenses have also been used in the field of popular entertainment. The British rock artist Peter Gabriel made use of them in his early solo live performances to magnify the size of his head, in contrast to the rest of his body, for dramatic and comic effect. In the Terry Gilliam film Brazil, plastic Fresnel screens appear ostensibly as magnifiers for the small CRT monitors used throughout the offices of the Ministry of Information. However, they occasionally appear between the actors and the camera, distorting the scale and composition of the scene to humorous effect. The Pixar movie Wall-E features a fresnel lens in the scenes where the protagonist watches the musical magnified on an iPod.

Canon and Nikon have used Fresnel lenses to reduce the size of telephoto lenses. Photographic lenses that include Fresnel elements can be much shorter than corresponding conventional lens design. Nikon calls their technology Phase Fresnel.

The Polaroid SX-70 camera used a Fresnel reflector as part of its viewing system.

View and large format cameras can utilize a Fresnel lens in conjunction with the ground glass, to increase the perceived brightness of the image projected by a lens onto the ground glass, thus aiding in adjusting focus and composition.

High-quality glass Fresnel lenses were used in lighthouses, where they were considered state of the art in the late 19th and through the middle of the 20th centuries; most are now retired from service. Lighthouse Fresnel lens systems typically include extra annular prismatic elements, arrayed in faceted domes above and below the central planar Fresnel, in order to catch all light emitted from the light source. The light path through these elements can include an internal reflection, rather than the simple refraction in the planar Fresnel element. These lenses conferred many practical benefits upon the designers, builders, and users of lighthouses and their illumination. Among other things, smaller lenses could fit into more compact spaces. Greater light transmission over longer distances, and varied patterns, made it possible to triangulate a position.

Perhaps the most widespread use of Fresnel lenses, for a time, occurred in automobile headlamps, where they can shape the roughly parallel beam from the parabolic reflector to meet requirements for dipped and main-beam patterns, often both in the same headlamp unit (such as the European H4 design). For reasons of cost, weight, and impact resistance, newer cars have dispensed with glass Fresnel lenses, using multifaceted reflectors with plain polycarbonate lenses. However, Fresnel lenses continue in wide use in automobile tail, marker, and backup lights.

Glass Fresnel lenses also are used in lighting instruments for theatre and motion pictures; such instruments are often called simply Fresnels. The entire instrument consists of a metal housing, a reflector, a lamp assembly, and a Fresnel lens. Many Fresnel instruments allow the lamp to be moved relative to the lens' focal point, to increase or decrease the size of the light beam. As a result, they are very flexible, and can often produce a beam as narrow as 7° or as wide as 70°. The Fresnel lens produces a very soft-edged beam, so is often used as a wash light. A holder in front of the lens can hold a colored plastic film (gel) to tint the light or wire screens or frosted plastic to diffuse it. The Fresnel lens is useful in the making of motion pictures not only because of its ability to focus the beam brighter than a typical lens, but also because the light is a relatively consistent intensity across the entire width of the beam of light. 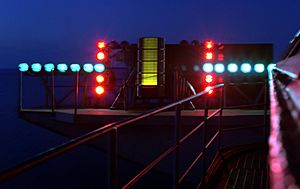 The Fresnel lens has seen applications for enhancing passenger reading lights on Airbus aircraft: in a dark cabin, the focused beam of light does not dazzle neighboring passengers.

The use of Fresnel lenses for image projection reduces image quality, so they tend to occur only where quality is not critical or where the bulk of a solid lens would be prohibitive. Cheap Fresnel lenses can be stamped or molded of transparent plastic and are used in overhead projectors and projection televisions.

Fresnel lenses of different focal lengths (one collimator, and one collector) are used in commercial and DIY projection. The collimator lens has the lower focal length and is placed closer to the light source, and the collector lens, which focuses the light into the triplet lens, is placed after the projection image (an active matrix LCD panel in LCD projectors). Fresnel lenses are also used as collimators in overhead projectors.

Since plastic Fresnel lenses can be made larger than glass lenses, as well as being much cheaper and lighter, they are used to concentrate sunlight for heating in solar cookers, in solar forges, and in solar collectors used to heat water for domestic use. They can also be used to generate steam or to power a Stirling engine.

Fresnel lenses can concentrate sunlight onto solar cells with a ratio of almost 500:1. This allows the active solar-cell surface to be reduced, lowering cost and allowing the use of more efficient cells that would otherwise be too expensive. In the early 21st century, Fresnel reflectors began to be used in concentrating solar power (CSP) plants to concentrate solar energy. One application was to preheat water at the coal-fired Liddell Power Station, in Hunter Valley Australia.

Fresnel lenses can be used to sinter sand, allowing 3D printing in glass.

The English children's fantasy television series Shadows features an episode "The Other Window", in which a scientist places a Fresnel lens on a window of his home, and his children and his mother are able to see visions of their ancestors in previous centuries in it.

All content from Kiddle encyclopedia articles (including the article images and facts) can be freely used under Attribution-ShareAlike license, unless stated otherwise. Cite this article:
Fresnel lens Facts for Kids. Kiddle Encyclopedia.