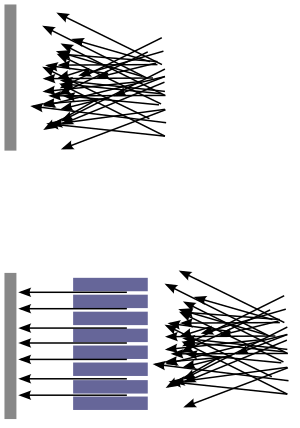 In the lower picture, the light has been collimated

Collimated light is light whose rays are parallel, and therefore will spread slowly as it propagates. The word is related to "collinear" with all rays lining up.

Light can be roughly collimated by using a collimator – a device which narrows a beam of particles or waves.

The word "collimate" comes from the Latin verb collimare, which originated in a misreading of collineare, "to direct in a straight line".

Laser light from crystal and some gas lasers is highly collimated because it is formed in an optical cavity between two parallel mirrors, in addition to being coherent. The divergence of high-quality laser beams is commonly less than 1 milliradian, and can be much less for large-diameter beams. Laser diodes emit less collimated light due to their short cavity, and therefore higher collimation requires a collimating lens.

Synchrotron light is very collimated. It is produced by bending relativistic electrons around a circular track.

The light from stars (other than the Sun) can be considered collimated for almost any purpose, because they are so far away they have almost no angular size.

An example of an optical collimating lens

All content from Kiddle encyclopedia articles (including the article images and facts) can be freely used under Attribution-ShareAlike license, unless stated otherwise. Cite this article:
Collimated light Facts for Kids. Kiddle Encyclopedia.