A lens is a clear (transparent) object (like glass, plastic or even a drop of water) that changes the way things look by bending the light that goes through it. They may make things appear larger, smaller, or upside-down. Some places lenses are used include spectacles (eyeglasses), contact lenses, cameras, projectors, microscopes, telescopes, magnifying glasses, etc. Each eye also has a lens.

They work by refraction, or the bending of light.

Lenses have three main shapes. Each different shape changes the image (making it bigger or smaller). The three types are: 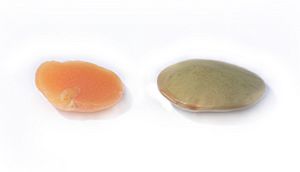 The word "lens" comes from the Latin word for "lentil," because the earliest convex lenses in common use were shaped like the bean.

The oldest written record of lenses is in the ancient Greek play by Aristophanes called "Clouds", where lenses were used with sunlight to make fire.

Galileo Galilei is commonly believed to have used lenses to make the first known refracting telescope. However, he merely adapted and improved a design he learned from Dutch lensmakers such as Hans Lippershey. He was probably the first to use telescopes to make accurate astronomical observations, though.

All content from Kiddle encyclopedia articles (including the article images and facts) can be freely used under Attribution-ShareAlike license, unless stated otherwise. Cite this article:
Lens (optics) Facts for Kids. Kiddle Encyclopedia.