The crystalline lens is a transparent, biconvex structure in the eye. With the cornea it helps to refract light to be focused on the retina. The lens changes shape. This changes the focal distance of the eye so that it can focus on objects at various distances. This adjustment of the lens is called accommodation. It is similar to the focusing of a photographic camera when it focuses its lenses. The lens is flatter on the inside.

The lens is also called the aquula (Latin, a little stream, dim. of aqua, water) or crystalline lens. In humans, the refractive power of the lens in its natural environment is approximately 18 dioptres. This is about one-third of the eye's total power.

The lens is part of the anterior segment of the human eye. In front of the lens is the iris, which regulates the amount of light entering into the eye. The lens is suspended in place by the suspensory ligament of the lens, a ring of fibrous tissue that attaches to the lens at its equator and connects it to the ciliary body. Posterior to the lens is the vitreous body, which, along with the aqueous humor on the anterior surface, bathes the lens. The lens has an ellipsoid, biconvex shape. The anterior surface is less curved than the posterior. In the adult, the lens is typically circa 10 mm in diameter and has an axial length of about 4 mm, though it is important to note that the size and shape can change due to accommodation and because the lens continues to grow throughout a person's lifetime.

The lens capsule is a smooth, transparent basement membrane that completely surrounds the lens. The capsule is elastic and is composed of collagen. It is synthesized by the lens epithelium and its main components are Type IV collagen and sulfated glycosaminoglycans (GAGs). The capsule is very elastic and so allows the lens to assume a more globular shape when not under the tension of the zonular fibers, which connect the lens capsule to the ciliary body. The capsule varies from 2 to 28 micrometres in thickness, being thickest near the equator and thinnest near the posterior pole.

The cells of the lens epithelium also serve as the progenitors for new lens fibers. It constantly lays down fibers in the embryo, fetus, infant, and adult, and continues to lay down fibers for lifelong growth. 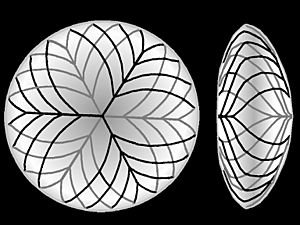 The lens fibers form the bulk of the lens. They are long, thin, transparent cells, firmly packed, with diameters typically 4–7 micrometres and lengths of up to 12 mm long. The lens fibers stretch lengthwise from the posterior to the anterior poles and, when cut horizontally, are arranged in concentric layers rather like the layers of an onion. If cut along the equator, it appears as a honeycomb. The middle of each fiber lies on the equator. These tightly packed layers of lens fibers are referred to as laminae. The lens fibers are linked together via gap junctions and interdigitations of the cells that resemble "ball and socket" forms.

All content from Kiddle encyclopedia articles (including the article images and facts) can be freely used under Attribution-ShareAlike license, unless stated otherwise. Cite this article:
Lens (eye) Facts for Kids. Kiddle Encyclopedia.