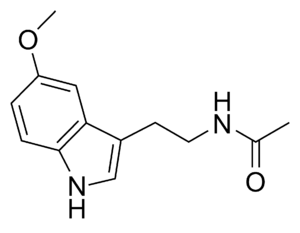 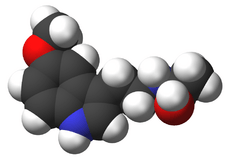 Melatonin is a hormone found in animals, plants, and microbes. In animals, levels of melatonin have a daily cycle. It drives the circadian rhythms of several biological functions.

Melatonin is produced in the pineal gland which is outside of the blood–brain barrier. It acts as an hormone, and is released into the blood.

Melatonin acts on melatonin receptors. It also acts directly because it is a powerful antioxidant, which protects DNA.

Melatonin supplements for humans have been given. Melatonin is categorized by the US Food and Drug Administration (FDA) as a dietary supplement, not a drug. A prescription-only, timed release melatonin product for people aged 55 and over was approved for use by the European Medicines Agency in 2007, despite having shown only small effects, and in Australia in 2009.

All content from Kiddle encyclopedia articles (including the article images and facts) can be freely used under Attribution-ShareAlike license, unless stated otherwise. Cite this article:
Melatonin Facts for Kids. Kiddle Encyclopedia.