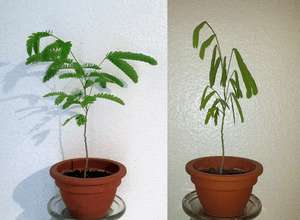 Sleeping tree by day and night

A circadian rhythm is a rhythm that repeats about every 24 hours. Plants and animals have these built-in cycles which allow them to flower at the right time, sleep at the right time etc. The word "circadian" comes from the Latin circa, "around", and diem or dies, "day", meaning "about a day." The study of biological time-keeping rhythms such as daily, tidal, weekly, seasonal, and annual rhythms, is called chronobiology.

Circadian rhythms are "built-in" so that, without time signals from the environment, they keep time at the rate of about 24-hour periods. When kept in total darkness, plants and animals continue to behave by the built-in period which is about 24 hours. The rhythms are also affected and re-set by time signals such as daylight and the length of the day and the night. It is important that the rhythms be re-set regularly to the natural light/dark cycle. Adult humans of all ages have a circadian rhythm which averages 24 hours and 11 minutes.

The circadian rhythms, also called the "biological clock" or the "body clock", of humans and other animals, regulate many bodily functions including feeding, sleeping, body temperature and hormone production.

The primary body clock in humans and other mammals is located in the suprachiasmatic nucleus (or nuclei) (SCN), a pair of groups of cells in the hypothalamus in the brain. Destruction of the SCN results in the complete absence of a regular sleep/wake rhythm. The SCN receives information about light through the eyes and directs the pineal gland to release the hormone melatonin at night.

Some people have circadian rhythm sleep disorders which cause them to sleep much too early (Advanced sleep-phase syndrome, ASPS), much too late (Delayed sleep-phase syndrome, DSPS) or in several bouts throughout the day and night (Irregular sleep-wake disorder). The worst circadian rhythm sleep disorder in people who can see is Non-24-hour sleep-wake disorder (Non-24); their "daily" rhythm lasts 25 hours or more so they sleep and wake up one or more hours later each day. Blind people who see no light at all can also have Non-24, but it is less serious and can usually be treated.

A variation of an eskinogram illustrating the influence of light and darkness on circadian rhythms and related physiology and behavior through the suprachiasmatic nucleus in humans.

Circadian rhythmicity is present in the sleeping and feeding patterns of animals, including human beings. There are also clear patterns of core body temperature, brain wave activity, hormone production, cell regeneration, and other biological activities. In addition, photoperiodism, the physiological reaction of organisms to the length of day or night, is vital to both plants and animals, and the circadian system plays a role in the measurement and interpretation of day length.

Timely prediction of seasonal periods of weather conditions, food availability, or predator activity is crucial for survival of many species. Although not the only parameter, the changing length of the photoperiod ('daylength') is the most predictive environmental cue for the seasonal timing of physiology and behavior, most notably for timing of migration, hibernation, and reproduction. 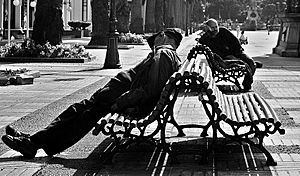 A short nap during the day does not affect circadian rhythms.

A number of studies have concluded that a short period of sleep during the day, a power-nap, does not have any measurable effect on normal circadian rhythms but can decrease stress and improve productivity.

Health problems can result from a disturbance to the circadian rhythm. Circadian rhythms also play a part in the reticular activating system, which is crucial for maintaining a state of consciousness.

Studies have also shown that light has a direct effect on human health because of the way it influences the circadian rhythms.

Lighting requirements for circadian regulation are not simply the same as those for vision; planning of indoor lighting in offices and institutions is beginning to take this into account. Animal studies on the effects of light in laboratory conditions have until recently considered light intensity (irradiance) but not color, which can be shown to "act as an essential regulator of biological timing in more natural settings".

Obesity and diabetes are associated with lifestyle and genetic factors. Among those factors, disruption of the circadian clockwork and/or misalignment of the circadian timing system with the external environment (e.g., light-dark cycle) might play a role in the development of metabolic disorders.

Shift-work or chronic jet-lag have profound consequences on circadian and metabolic events in the body. Animals that are forced to eat during their resting period show increased body mass.

Due to the work nature of airline pilots, who often cross several timezones and regions of sunlight and darkness in one day, and spend many hours awake both day and night, they are often unable to maintain sleep patterns that correspond to the natural human circadian rhythm; this situation can easily lead to fatigue. The NTSB cites this as contributing to many accidents and has conducted several research studies in order to find methods of combating fatigue in pilots.

Disruption to rhythms usually has a negative effect. Many travellers have experienced the condition known as jet lag, with its associated symptoms of fatigue, disorientation, and insomnia.

All content from Kiddle encyclopedia articles (including the article images and facts) can be freely used under Attribution-ShareAlike license, unless stated otherwise. Cite this article:
Circadian rhythm Facts for Kids. Kiddle Encyclopedia.