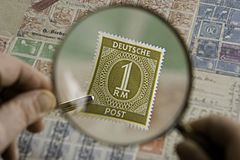 A magnifying glass used to look at a postage stamp

A magnifying glass is a lens through which can be used to make things appear bigger, so you can see them better. It is used in many applications and manual operations, e.g., for examining postage stamps in philately.

A pair of binoculars is like a telescope for each eye. Spectacles or eyeglasses also use lenses to correct a person's vision. 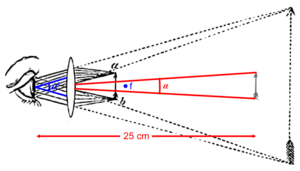 "The evidence indicates that the use of lenses was widespread throughout the Middle East and the Mediterranean basin over several millennia". The earliest explicit written evidence of a magnifying device is a joke in Aristophanes's The Clouds from 424 BC, where magnifying lenses to ignite tinder were sold in a pharmacy, and Pliny the Elder's "lens", a glass globe filled with water, used to cauterize wounds. (Seneca wrote that it could be used to read letters "no matter how small or dim"). A convex lens used for forming a magnified image was described in the Book of Optics by Ibn al-Haytham in 1021. After the book was translated during the Latin translations of the 12th century, Roger Bacon described the properties of a magnifying glass in 13th-century England. This was followed by the development of eyeglasses in 13th-century Italy.

All content from Kiddle encyclopedia articles (including the article images and facts) can be freely used under Attribution-ShareAlike license, unless stated otherwise. Cite this article:
Magnifying glass Facts for Kids. Kiddle Encyclopedia.