The genus name translates as "true cycloid goby", referring to the scales, while the species epithet is in honor of J. S. Newberry (1822-1892), an American geologist, physician and explorer, who collected fishes for the species species describer, Charles Frédéric Girard, just not this species.

The large mouth extends back to or past the posterior edge of the eye, and is angled upwards. The eyes are spaced far apart. Unusually among gobies, the scales are cycloid instead of ctenoid; they are always absent from the head, and often from the underside too.

Breeding individuals will demonstrate color changes, with the males becoming more black with white spots as females become tan or reddish-brown with golden or dark-brown sides. Females may also take on a darker color while fighting.

Their range extends from Tillas Slough at the mouth of the Smith River in Del Norte County, California, south to Agua Hedionda Lagoon in San Diego County. While once recorded in at least 87 coastal locations, they are now gone from many, including San Francisco Bay, although they can still be found nearby at Rodeo Lagoon, in Marin County.

Despite the common name, this goby inhabits lagoons formed by streams running into the sea, as well as semi-closed estuaries. The lagoons are blocked from the Pacific Ocean by sand bars, admitting salt water only during particular seasons, and so their water is brackish and cool. The northern tidewater goby prefers salinities of less than 10 ppt. Juveniles have been found as far upstream as 12 km, e.g. in Ten Mile River, Mendocino County, and San Antonio Creek and the Santa Ynez River, Santa Barbara County, sometimes in sections of stream impounded by California Golden beavers (Castor canadensis subauratus) which provide ideal slow-moving water habitat for northern tidewater gobies. These fish also prefer sandy bottoms with depths of 20–100 cm, near emergent vegetation beds. The northern tidewater goby may be found in small groups of less than a dozen or occasionally in large aggregations of hundreds.

Male northern tidewater gobies burrow into sand and mud in the spring, cementing together grains of sand with a mucous, and shutting the burrow off from the waters above with a mucous and sand plug. Females will become aggressive during the spring and fight over a potential mate, slapping each other with their tails and biting when posturing is insufficient to drive their rivals away. The female will then attempt to entice the male to open his burrow.

If the female is successful (which may be infrequent - Camm Swift reports that 23 observed courtships resulted in only a single successful entry into the burrow by the female,) she will lay eggs on the burrow's sides and roof. The male protects the eggs for 9–10 days before they hatch. Although their life expectancy is not well known, tidewater gobies may live for only a year.

The diet of the adult northern tidewater goby is comprised mostly of benthic invertebrates and local insects, though their diet's exact composition can vary by season. In some lagoon populations, gobies have been found to feed on seasonally available invasive New Zealand mud snails, reflecting the fish's adaptive foraging behavior to non-native species in its environment. 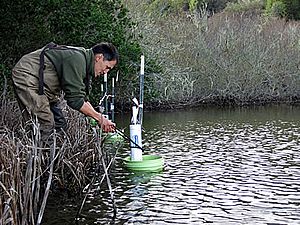 The northern tidewater goby was listed by the state of California for protection in 1987, and federally listed in 1994. However, there has been some controversy over this, since many populations in its range are apparently secure, and the fish is even abundant at times. However, the fish's need for specific kind of habitat means that the populations are isolated from each other, and subject to extirpation due to various human activities, such as draining of wetlands, sand bar breaches for the purpose of tidal flushing, pollutant accumulation in lagoons, and so forth. Even so, studies have shown that it is a resilient species, and populations have been successfully restored to wetlands that have been protected.

All content from Kiddle encyclopedia articles (including the article images and facts) can be freely used under Attribution-ShareAlike license, unless stated otherwise. Cite this article:
Northern tidewater goby Facts for Kids. Kiddle Encyclopedia.