Pacifica is a city in San Mateo County, California, on the coast of the Pacific Ocean between San Francisco and Half Moon Bay.

The City of Pacifica is spread along a six-mile (9.7-kilometre) stretch of coastal beaches and hills in north central California. The city comprises several small valleys spread between Sweeney Ridge in the east, Montara Mountain to the south, and the Pacific Ocean's rocky bluffs to the west. 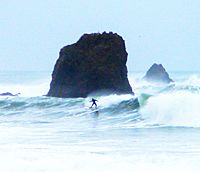 Pacifica is well known regionally as a popular surfing destination. Surfers and families often visit Linda Mar Beach. Rockaway Beach is a scenic location and offers recreation, shopping and dining. 2005 marked the opening of the top ranked Pacifica Skateboard Park. Pacifica is also a popular mountain biking destination, with many trails crossing the hillsides that surround the city, including Pedro Mountain Road, Sweeney Ridge, and areas of the Golden Gate National Recreation Area. Fishermen frequent the local beaches and the Pacifica Pier, often catching Striped Bass and Salmon. Pacifica is also a popular place to hike, with many trails that wind along the beaches and bluffs, including Mori Point, San Pedro Valley County Park, the Sanchez Adobe, Milagra Ridge, and the privately owned Pacifica quarry. For live local theater and performing arts, Pacifica Spindrift Players is a local and popular favorite, in addition to Pacifica Performances which regularly provides both musical presentations and performing arts as well. Pacifica is also home to the Sharp Park Golf Course, which was designed in 1931 by architect Alister MacKenzie. The world class bromeliad nursery, Shelldance Orchid Gardens is located just off Highway 1 in Pacifica, adjacent to the Sweeney Ridge hiking trailhead.

Pacifica is divided into roughly twelve distinct neighborhoods from north to south: 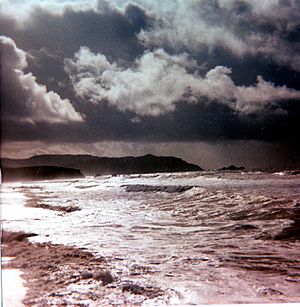 Pacifica shoreline during the 1983 El Niño

There were 13,994 households out of which 32.0% had children under the age of 18 living with them, 53.5% were married couples living together, 11.0% had a female householder with no husband present, and 31.0% were non-families. 21.2% of all households were made up of individuals and 6.4% had someone living alone who was 65 years of age or older. The average household size was 2.73 and the average family size was 3.21.

The Reverend Herschell Harkins Memorial pier was constructed in 1973 and was designed to carry sewage piping out to sea. It was closed in 1992 due to corrosion of some of the structure. Since then the pier has been repaired and is a well known fishing spot; on July 8–9, 1995, over 1,000 salmon were caught from the pier. 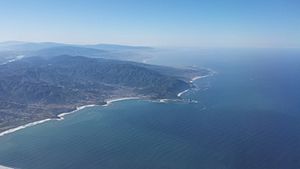 Pacifica straddles San Pedro Creek which flows from the western slope of Sweeney Ridge. The far eastern portion of Pacifica includes San Andreas Creek which flows down the eastern slope of Sweeney Ridge. The Portola expedition followed these two creeks in the discovery of San Francisco Bay. Calera Creek runs through Pacifica Quarry and is protected as ESHA Environmentally Sensitive Habitat. 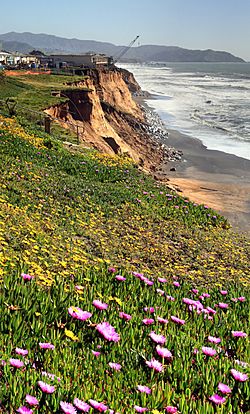 Pacifica is the location of the oldest European discovery of the San Francisco Bay. An expedition led by Gaspar de Portolà sighted the bay by climbing the hills of Sweeney Ridge in Pacifica on October 31, 1769. Before then, earlier Spanish maritime explorers of the California coast (such as Juan Cabrillo and Sebastian Vizcaino) had missed the San Francisco Bay because heavy fog so frequently shrouded the entrance of the San Francisco Bay into the Pacific Ocean (the Golden Gate). Sighting the San Francisco Bay accelerated the Spanish colonization of Alta California because it was the only large, safe, centrally located harbor on the Alta California coast. The Spanish had used Monterey Bay up until then as their main harbor, but it was much more dangerous than San Francisco Bay. In the Spanish era, Pacifica was the site of the San Pedro Valley Mission Outpost (1786–1793) of Mission Dolores. This was dissolved when a newly independent Mexico secularized the mission system. Pacifica is also the site of the still extant Mexican-era Sánchez Adobe built in 1846. The city is located on a part of the Mexican land grant Rancho San Pedro given to Francisco Sanchez in 1839. 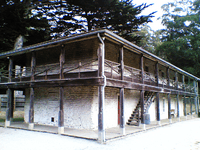 Located in Pacifica, the Sanchez Adobe is the oldest structure in San Mateo County.

Pacifica was incorporated in 1957, relatively recently in the history of San Mateo County, as the union of nine previously separate, unincorporated communities, including Edgemar, Sharp Park, Pacific Manor (or just Manor), Vallemar, Rockaway Beach and San Pedro Terrace-By-The-Sea, stops on the short lived Ocean Shore Railroad. The name "Pacifica" was chosen by vote. A close runner-up was the name "Coastside". In 1960, the city seal was designed by resident Ralph Barkey, who was inspired by Ralph Stackpole's towering "Pacifica" statue produced for the 1939–1940 Golden Gate International Exposition on Treasure Island in the San Francisco Bay.

All content from Kiddle encyclopedia articles (including the article images and facts) can be freely used under Attribution-ShareAlike license, unless stated otherwise. Cite this article:
Pacifica, California Facts for Kids. Kiddle Encyclopedia.