Kids Encyclopedia Facts
This page is about the San Mateo County town. For the Colusa County town, see Princeton, California. 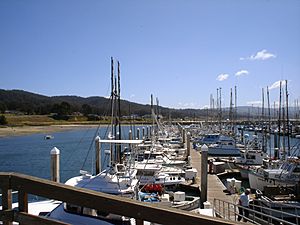 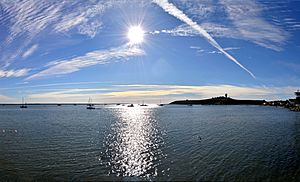 Princeton-by-the-Sea (sometimes, especially locally, called Princeton) is an unincorporated community on the coast of San Mateo County, California. The ZIP code is 94019 and the community is inside area code 650.

This area was inhabited by Ohlone tribes in pre-Columbian times. According to mission records, the Chiguan Ohlones, who numbered about 50, called the place Ssatumnumo, and had a second village, Chagunte, near Half Moon Bay.

Because of the special microhabitat of the adjacent Pillar Point Harbor, there are numerous pelagic birds that visit the local area. The area has a boating cachet for harbor activities and has been a tourist destination since the early 1900s with the establishment of the Princeton Inn Hotel. As of 2000, the population of the community is 297.

The annual surfing competition Mavericks actually takes place in Princeton, although it is usually attributed to neighboring Half Moon Bay.

Addresses within Princeton-by-the-Sea are often listed as Half Moon Bay addresses.

This community is located on level ground at an elevation of five feet (1.5 m) above mean sea datum (U.S. Geological Survey, 1980). The soil in the Princeton-by-the-Sea vicinity has good drainage, since the surface consists of marine deposits with underlying water bearing sediments of unconsolidated sand and gravel deposits (Earth Metrics, 1989). Until 1973 extensive row crop farming was conducted immediately at the northern edge of Princeton.

A panorama of Princeton-by-the-Sea from Breakwater

All content from Kiddle encyclopedia articles (including the article images and facts) can be freely used under Attribution-ShareAlike license, unless stated otherwise. Cite this article:
Princeton-by-the-Sea, California Facts for Kids. Kiddle Encyclopedia.