Ravioli is a type of Italian pasta dish. It is usually two layers of pasta dough with a filling between the two layers. There are many different recipes, with different kinds of fillings. The most common fillings are meat, vegetables or ricotta cheese. People eat this kind of food with a sauce or melted butter.

The earliest known mention of ravioli appears in the personal letters of Francesco di Marco Datini, a merchant of Prato in the 14th century. In Venice, the mid-14th-century manuscript Libro per cuoco offers ravioli of green herbs blanched and minced, mixed with beaten egg and fresh cheese, simmered in broth and seasoned with "sweet and strong spices". In Rome, ravioli were already well-known when Bartolomeo Scappi served them with boiled chicken to the papal conclave of 1549.

Ravioli were already known in 14th century England, appearing in the Anglo-Norman vellum manuscript Forme of Cury under the name of rauioles. Sicilian ravioli and Malta's ravjul may thus be older than North Italian ones. Maltese ravjul are stuffed with irkotta, the locally produced sheep's-milk ricotta, or with gbejna, the traditional fresh sheep's-milk cheese. 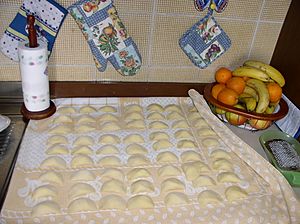 Preparation of home-made ravioli with ricotta

Traditionally, ravioli are made at home. The filling varies according to the area where they are prepared. In Rome and Latium the filling is made with ricotta cheese, spinach, nutmeg and black pepper. In Sardinia, ravioli are filled with ricotta and grated lemon rind.

In Europe and the United States, fresh-packed ravioli have several weeks of shelf life. Canned ravioli was pioneered by the Italian Army in the First World War and was popularized by Heinz and Buitoni in the UK and Europe, and Chef Boyardee in the United States. Canned ravioli may be filled with beef, processed cheese, chicken, or Italian sausage and served in a tomato, tomato-meat, or tomato-cheese sauce. Toasted ravioli (ravioli that have been breaded and deep fried) was developed in St. Louis, Missouri, and is a popular appetizer and snack food.

Ravioli are commonly encountered in the cooking of Nice, the broader Côte d'Azur, and the surrounding regions in the south of France. The contents of these vary greatly, but most idiosyncratic to the region is the use of leftover daube meat. Miniaturized cheese-filled ravioli, locally called "ravioles", are a specialty of the Drôme department in the Rhône-Alpes region, particularly the commune of Romans-sur-Isère, and are frequently served au gratin. 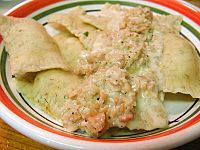 In Turkey, Mantı which is similar to ravioli is a popular dish. It is stuffed with spiced meat and served with paprika sauce and yoghurt. Similar dishes in China are the jiaozi or wonton.

In India, a popular dish called gujiya is similar to ravioli. However, it is prepared sweet, with a filling of dry fruits, sugar, and a mixture of sweet spices, then deep fried in vegetable oil. Different stuffings are used in different parts of India. The dish is a popular food prepared during festivals all over the country.

Jewish cuisine has a similar dish called kreplach, a pocket of meat or other filling, with an egg pasta based covering. It is simmered in chicken soup. In that method of preparation it appears to be the direct descendant or inspiration of the original dish, which was simmered in "broth". Claudia Roden argues it originated in the Venetian Ghetto at about the same time ravioli was developed, and in time became a mainstay of Jewish cuisine.

All content from Kiddle encyclopedia articles (including the article images and facts) can be freely used under Attribution-ShareAlike license, unless stated otherwise. Cite this article:
Ravioli Facts for Kids. Kiddle Encyclopedia.