Lazio is one of the twenty regions of Italy, in central Italy. The capital is Rome.

The Pontine Islands (Italian: Isole Ponziane) are an archipelago in the Tyrrhenian Sea off the west coast of Italy. They are part of Lazio.

Lazio has four provinces and one Metropolitan city (Rome). 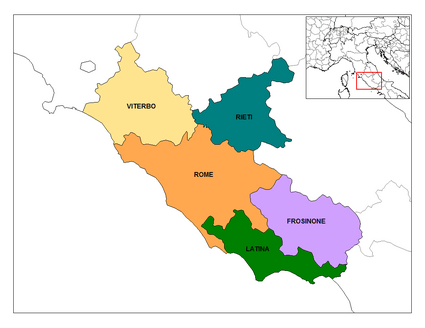 The 10 communi with more people living in it are:

All content from Kiddle encyclopedia articles (including the article images and facts) can be freely used under Attribution-ShareAlike license, unless stated otherwise. Cite this article:
Lazio Facts for Kids. Kiddle Encyclopedia.