Province of Latina facts for kids

The Province of Latina (Italian: Provincia di Latina) is an area of local government at the level of province in the Republic of Italy. It is one of five provinces that form the region of Lazio. The provincial capital is the city of Latina. It is bordered by the provinces of Frosinone to the north-east and by the Metropolitan City of Rome Capital to the north-west.

Sub-divisions of the province

The most populous comuni are:

The province of Latina was founded on 18 December 1934, encompassing mainly the drained areas of the Agro Pontino previously part of the province of Rome. Apart the Pontine lands, it includes the Aurunci, Lepini and Ausoni mountain ranges, as well as the Pontine islands archipelago. The port of Gaeta and Formia, in the southernmost part of the province, belonged traditionally and linguistically to Campania.

Although the smallest of the provinces in the Lazio region, the province of Latina includes a variety of geographical and historical areas.

The mainland area is, in the south- and north-eastern part, mostly occupied by limestone hills and mountains. Ranges include the Lepini, Aurunci, Ausoni. The highest elevation is that of 1,533-metre (5,030 ft) Monte Petrella (Aurunci). The climate is semi-continental with hot summers and cold winters; temperatures rarely fall below 0 °C (32 °F). The mountains are characterized by small medieval settlements (borghi) and traditionally live of cattle raising and agriculture; however, these activities saw a marked decline in recent times, and today workers usually commute daily to work in Rome or Latina. Tourism is an increasing interesting resource, attracted especially by the uncontaminated nature and by artistic traces of the Middle Ages (Abbeys of Valvisciolo and Fossanova, where St. Thomas Aquinas died). The main centres of this area are Cori, Sezze, and Priverno.

The Agro Pontino occupies the plain extending southwards from Aprilia to Terracina, along the Tyrrhenian Sea. Until the 1930s, it was covered by unhealthy marshes, which were dried up under Fascist government; the area as subsequently settled by immigrants coming from north-eastern Italy, in newly built cities like Sabaudia or Latina itself. The sole mountain peak is that of Circeo promontory. The climate is mild. The Agro Pontino is the most economically developed part of the province, housing a flourishing agricultural sector and numerous service firms and industries. It also houses much of the water basins of the province, like the coast Lakes of Fogliano, Caprolace, and Paola. 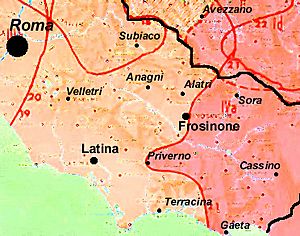 Cities rich of ancient and medieval history, Gaeta and Formia were traditionally part of the Kingdom of Naples. They belonged to the Campania region until 1934. Traces of the different cultural milieu can be identified in the costumes and, most of all, in the local dialect, a variant of Neapolitan. Formia and Gaeta constitutes a single metropolitan area with an important port (with connection to the Pontine Islands), a station on the main railway line Rome-Naples. Other important centres include Sperlonga and Minturno.

Once mainly used as penitentiaries, the Pontine Islands are now a renowned tourist resort in summer. The only inhabited islands are Ponza and Ventotene.

All content from Kiddle encyclopedia articles (including the article images and facts) can be freely used under Attribution-ShareAlike license, unless stated otherwise. Cite this article:
Province of Latina Facts for Kids. Kiddle Encyclopedia.