Province of Rome facts for kids

The Province of Rome (Italian: Provincia di Roma) was one of the five provinces that formed part of the region of Lazio in Italy. It was established in 1870 and disestablished in 2014. It was essentially coterminous with the Rome metropolitan area. The city of Rome was the provincial capital. During the 1920s, the boundary of the province shrank as land was ceded to establish new provinces. The Province of Rome was the most populous province in Italy. On 1 January 2015, it was superseded by a new local government body - the Metropolitan City of Rome Capital. 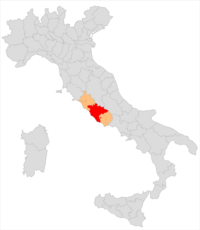 Prior to 1870, the area of the province was the Papal States. Following the capture of Rome by the forces of the Kingdom of Italy, the Province of Rome was established. The province was initially divided into five "districts" (Italian: circondari or Italian: Circondario): Rome, Civitavecchia, Frosinone, Velletri and Viterbo. They corresponded to the old papal delegazioni.

All content from Kiddle encyclopedia articles (including the article images and facts) can be freely used under Attribution-ShareAlike license, unless stated otherwise. Cite this article:
Province of Rome Facts for Kids. Kiddle Encyclopedia.