Umbria is one of the twenty regions of Italy, in center Italy. It is the one of the smallest Italian region. Its capital is Perugia.

It is the only region without a coastline and without a border with other countries.

The region is located in Central Italy bordered by Marche to the east and northeast, Tuscany to the west and northwest, and Lazio to the south and southwest.

The main river in the region is the Tiber. Other important rivers are the Nera, Paglia, Topino, Chiascio and Nestore.

The highest mountain in the region is Cima del Redentore, in the Sibillini Mountains (Italian: Monti Sibillini), with an altitude of 2,448 m (8,031 ft).

Umbria is divided into two provinces: 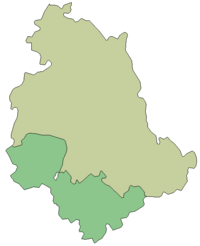 All content from Kiddle encyclopedia articles (including the article images and facts) can be freely used under Attribution-ShareAlike license, unless stated otherwise. Cite this article:
Umbria Facts for Kids. Kiddle Encyclopedia.