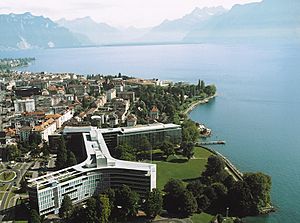 Nestlé is the world's largest food producer, by revenue. It was formed in the 1950s, when two companies merged. At the start in the 1860s, the company produced soluble milk that could be given to infants and babies. From about the 1930s, Nestlé also produced soluble coffee. In 2010, Nestle's revenue was about 109 billion Swiss Francs, and its net profit was about 32 billion Swiss Francs.

All content from Kiddle encyclopedia articles (including the article images and facts) can be freely used under Attribution-ShareAlike license, unless stated otherwise. Cite this article:
Nestlé Facts for Kids. Kiddle Encyclopedia.