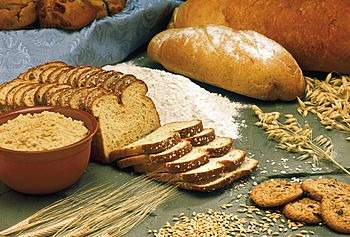 Oats, barley, and some food products made from cereal grains. 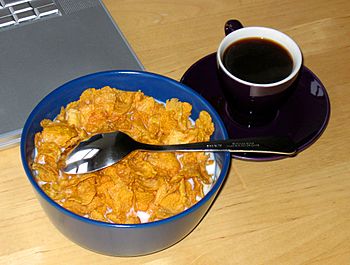 A bowl of breakfast cereal with a cup of coffee.

Cereal usually refers to a type of grass that is grown to be eaten.

It is a common breakfast meal. The kind of cereal eaten for breakfast is called breakfast cereal. This is made of grain, and usually eaten with milk in the United States. It is often sweetened with sugar, syrup, or fruit. There is a large variety of cereals. Some types of breakfast cereal include Cheerios, Kellogg's, Cocoa Puffs and various other brands. Most breakfast cereals are targeted to be sold to kids, but there are many for adults as well. Some adult cereals are made for diets or other health benefits.

The word "cereal" comes from 'Ceres', the name of the Roman goddess of harvest and agriculture. Grains are called corn in the United Kingdom and Ireland, but in the United States, Canada, Australia, and New Zealand corn means maize.

In the 19th century, Americans ate meat a lot for breakfast and usually did not eat grains and fiber. But after that, people who were interested in eating more healthy foods began a push for healthy breakfasts.

This brought up the creation of Granula. The name Granula comes from granulates, formed of grain. In 1863 this became the first breakfast cereal and included heavy nuggets made from bran, the outer husk of a grain that is taken out when making flour. The cereal had to be soaked overnight before being eaten. Simply pouring milk over it was not enough to make it eatable.

The cereals eaten today grew out of a health campaign that began in the 1860s. Thin baked dough served to patients in hospitals inspired two men, C.W. Post and W. K. Kellogg. These two men started their own companies, named them after themselves.

The word cereal is derived from Ceres, the Roman goddess of harvest and agriculture.

A wheat field in Dorset, England

While each individual species has its own peculiarities, the cultivation of all cereal crops is similar. Most are annual plants; consequently one planting yields one harvest. Wheat, rye, triticale, oats, barley, and spelt are the "cool-season" cereals. These are hardy plants that grow well in moderate weather and cease to grow in hot weather (approximately 30 °C, but this varies by species and variety). The "warm-season" cereals are tender and prefer hot weather. Barley and rye are the hardiest cereals, able to overwinter in the subarctic and Siberia. Many cool-season cereals are grown in the tropics. However, some are only grown in cooler highlands, where it may be possible to grow multiple crops per year.

For the past few decades, there has also been increasing interest in perennial grain plants. This interest developed due to advantages in erosion control, reduced need for fertiliser, and potential lowered costs to the farmer. Though research is still in early stages, The Land Institute in Salina, Kansas has been able to create a few cultivars that produce a fairly good crop yield. 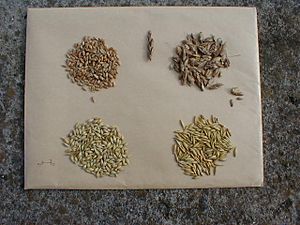 The warm-season cereals are grown in tropical lowlands year-round and in temperate climates during the frost-free season. Rice is commonly grown in flooded fields, though some strains are grown on dry land. Other warm climate cereals, such as sorghum, are adapted to arid conditions.

Cool-season cereals are well-adapted to temperate climates. Most varieties of a particular species are either winter or spring types. Winter varieties are sown in the autumn, germinate and grow vegetatively, then become dormant during winter. They resume growing in the springtime and mature in late spring or early summer. This cultivation system makes optimal use of water and frees the land for another crop early in the growing season.

Winter varieties do not flower until springtime because they require vernalization: exposure to low temperatures for a genetically determined length of time. Where winters are too warm for vernalization or exceed the hardiness of the crop (which varies by species and variety), farmers grow spring varieties. Spring cereals are planted in early springtime and mature later that same summer, without vernalization. Spring cereals typically require more irrigation and yield less than winter cereals. 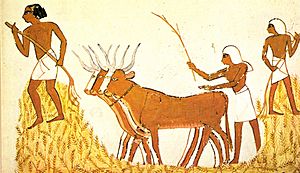 Threshing of grain in ancient Egypt

Once the cereal plants have grown their seeds, they have completed their life cycle. The plants die, become brown, and dry. As soon as the parent plants and their seed kernels are reasonably dry, harvest can begin.

In developed countries, cereal crops are universally machine-harvested, typically using a combine harvester, which cuts, threshes, and winnows the grain during a single pass across the field. In developing countries, a variety of harvesting methods are in use, depending on the cost of labor, from combines to hand tools such as the scythe or grain cradle.

If a crop is harvested during humid weather, the grain may not dry adequately in the field to prevent spoilage during its storage. In this case, the grain is sent to a dehydrating facility, where artificial heat dries it.

In North America, farmers commonly deliver their newly harvested grain to a grain elevator, a large storage facility that consolidates the crops of many farmers. The farmer may sell the grain at the time of delivery or maintain ownership of a share of grain in the pool for later sale. Storage facilities should be protected from small grain pests, rodents and birds.

All content from Kiddle encyclopedia articles (including the article images and facts) can be freely used under Attribution-ShareAlike license, unless stated otherwise. Cite this article:
Cereal Facts for Kids. Kiddle Encyclopedia.