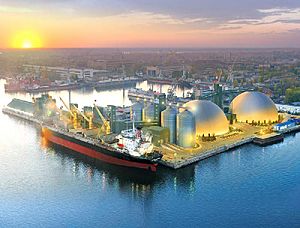 A grain elevator is an agrarian facility complex designed to stockpile or store grain. In grain trade, the term grain elevator also describes a tower containing a bucket elevator or a pneumatic conveyor, which scoops up grain from a lower level and deposits it in a silo or other storage facility.

Before the advent of the grain elevator, grain was usually handled in bags rather than in bulk (large quantities of loose grain). Dart's Elevator was a major innovation. It was invented by Joseph Dart, a merchant, and Robert Dunbar, an engineer, in 1842 and 1843, in Buffalo, New York. Using the steam-powered flour mills of Oliver Evans as their model, they invented the marine leg, which scooped loose grain out of the hulls of ships and elevated it to the top of a marine tower.

Early grain elevators and bins were often built of framed or cribbed wood, and were prone to fire. Grain-elevator bins, tanks, and silos are now usually made of steel or reinforced concrete. Bucket elevators are used to lift grain to a distributor or consignor, from which it falls through spouts and/or conveyors and into one or more bins, silos, or tanks in a facility. When desired, silos, bins, and tanks are emptied by gravity flow, sweep augers, and conveyors. As grain is emptied from bins, tanks, and silos it is conveyed, blended, and weighted into trucks, railroad cars, or barges, and shipped to grain wholesalers, exporters, and/or local end-users, such as flour mills, breweries, and ethanol and alcohol distilleries.

All content from Kiddle encyclopedia articles (including the article images and facts) can be freely used under Attribution-ShareAlike license, unless stated otherwise. Cite this article:
Grain elevator Facts for Kids. Kiddle Encyclopedia.