Hemingway is a town in Williamsburg County, South Carolina. The population was 573 at the 2000 census.

Hemingway was created from a crossroads community named Lamberts in 1911 by Dr. W. C. Hemingway, in an effort to secure a depot for the proposed Seaboard Air Line Railroad, which was to run from Mullins to Andrews. Land owned by Dr. Hemingway was surveyed and the lots auctioned off. Subsequently, the railroad established a Hemingway depot, and the post office name was changed to Hemingway. 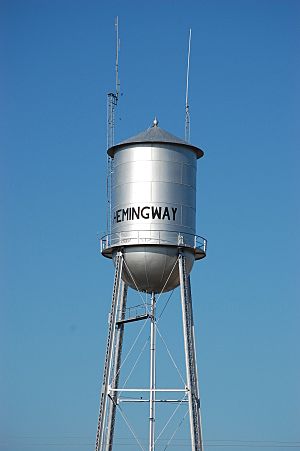 With rail access, Hemingway grew into a market town for local agricultural products. Cotton declined after 1921, when the boll weevil arrived, but was already being replaced by flue cured tobacco as the primary money crop for farmers. Other local products were naval stores from the pine forests (later replaced by timbering), corn, soybeans, wheat, and vegetables.

Hemingway is near the Pee Dee River, which was the main commercial route for the area until the coming of the railroad. Snows Lake is a lake near Hemingway. This is also a site in the Revolutionary War camp of US war hero, General Francis Marion. The river was named by early explorers after the Pee Dee tribe. A major tributary is the Waccamaw River likewise named.

Pleasant Hill Consolidated School was listed on the National Register of Historic Places in 1998.

Hemingway is known for the Bar-B-Q Shag Festival held in the spring of each year. This features a cookoff of low country style pork barbecue, and dancing of the official state dance - the Shag.

There were 259 households out of which 26.3% had children under the age of 18 living with them, 49.4% were married couples living together, 15.8% had a female householder with no husband present, and 29.7% were non-families. 29.3% of all households were made up of individuals and 15.4% had someone living alone who was 65 years of age or older. The average household size was 2.21 and the average family size was 2.71.

All content from Kiddle encyclopedia articles (including the article images and facts) can be freely used under Attribution-ShareAlike license, unless stated otherwise. Cite this article:
Hemingway, South Carolina Facts for Kids. Kiddle Encyclopedia.