Kids Encyclopedia Facts
Not to be confused with Johnsonville, North Carolina.

Johnsonville is a city in Florence County, South Carolina, United States. The population was 1,480 at the 2010 census. It is part of the Florence Metropolitan Statistical Area.

The city was founded in 1913 west of the spot of the former Witherspoon's Ferry on the Pee Dee River, where General Francis Marion received his commission for the Revolutionary War. Edward "Dwight" Carraway, Jr. (1956-2019), a resident of Johnsonville, holds the record of South Carolina's youngest person elected to public office in June 1976. Also, he was a classmate of Joseph Stevens "Steve" Dukes who has served as mayor of Johnsonville since 2004. 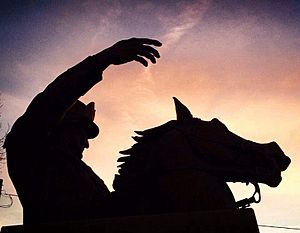 In use during the American Revolution, Witherspoon's Ferry was the site where Francis Marion accepted command of the Williamsburg Militia in 1780. Ownership of the ferry lands passed from Robert to John Witherspoon in 1787. In 1802, John bequeathed the land to Aimwell Presbyterian Church.

Witherspoon's Ferry was a strategic ferry in the northeastern area of Williamsburg County, vested in John Witherspoon in 1801 and remaining in his charge until his death in 1815. According to the terms of John Witherspoon's will, the ferry was then vested in J. D. Witherspoon, executor, for a term of 14 years, "in trust for and having the sole benefit of the incorporated Presbyterian Church at Aimwell on the Pee Dee River."

In 1819, former South Carolina Governor David R. Williams, son-in-law of John Witherspoon, obtained these ferry lands. William J. Johnson, born 1787, succeeded J. D. Witherspoon at the ferry after purchasing the plantation in 1825 from the Witherspoon estate. The 1850 census of Williamsburg County shows William Johnson, a man of considerable wealth for his time and place, living just below where the American Legion stands in Johnsonville today.

Johnson's Ferry was the point at which the stagecoach stopped to change horses. As the stagecoach passed east over the Lynches River on the ferry, a Johnson slave in charge of the ferry mules announced the number of passengers with a blast from a fox horn: one blast for each passenger, thus informing Mrs. Johnson of the number of places that should be set for dinner. The passengers ate during the change of horses, and then proceeded to the next stop.

The stagecoach stopped at the Johnsons' house. All the mail for the surrounding communities was left in Capt. Johnson's care. This provided an excellent reason for him to request a post office be granted. In 1843 a post office, named "Johnsonville", was established near the ferry.

The city of Johnsonville was incorporated in 1913. 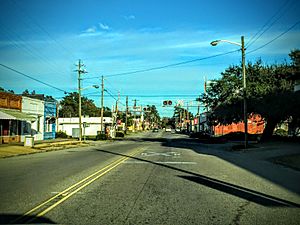 South Carolina Highway 341 passes through the center of town as Broadway Street, leading west 20 miles (32 km) to Lake City. Florence, the county seat, is 35 miles (56 km) to the northwest, while Myrtle Beach is 45 miles (72 km) to the east.

The city of Johnsonville is located only a few miles from The Johnsonville Impact Crater, a circular geophysical feature that has been interpreted by some scientists as an impact crater, situated at the junction of Lynches River and the Pee Dee River in South Carolina. Snows Island, at that point, is believed to be the upthrust of the center after the impact. This eight-mile-wide crater is not well defined at the surface and was discovered by magnetic anomalies and supported by the study of well drilling cores. Supposed impact breccia was found in these cores.

There were 532 households, out of which 35.7% had children under the age of 18 living with them, 52.8% were married couples living together, 18.6% had a female householder with no husband present, and 22.2% were non-families. 19.9% of all households were made up of individuals, and 9.2% had someone living alone who was 65 years of age or older. The average household size was 2.65 and the average family size was 3.03.

Johnsonville's graded schools are located in Florence County School District 5, a small, rural district located in the lower part of Florence County encompassing the city of Johnsonville and the surrounding areas. The district covers approximately 88 square miles that includes a total population of 6,440 residents, which includes the 1,480 residents within the town limits.

Johnsonville has a public library, a branch of the Florence County Library System.

All content from Kiddle encyclopedia articles (including the article images and facts) can be freely used under Attribution-ShareAlike license, unless stated otherwise. Cite this article:
Johnsonville, South Carolina Facts for Kids. Kiddle Encyclopedia.