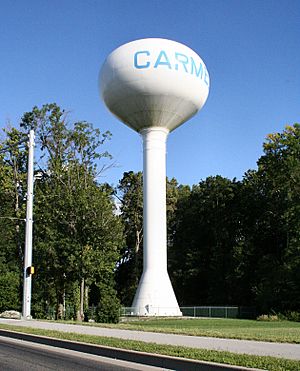 A water tower in Carmel, Indiana.

A water tower is a building that is used to hold and give out water. It is almost always built on a high place. It works because a pump gives water to the tower, and gravity makes the saved water go out to the places that need water. Those places are connected to the tower by pipes. A water tower is good when there is no power because it uses gravity to send out the water.

Many water towers were constructed during the Industrial Revolution; some are now considered architectural landmarks and monuments, and may not be demolished. Some are converted to apartments.

In certain areas, such as New York City, smaller water towers are constructed for individual buildings. 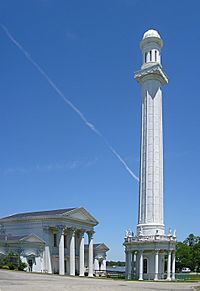 Completed in 1860, the Louisville Water Tower was the first modern water tower in the world 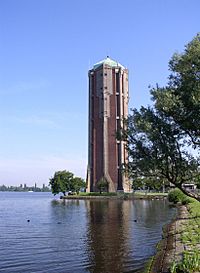 The Water Tower of Aalsmeer, the Netherlands

A variety of materials can be used to construct a typical water tower; steel and reinforced or prestressed concrete are most often utilized (with wood, fiberglass, or brick also in use), incorporating an interior coating to protect the water from any effects from the lining material. The tower is usually spherical, cylindrical, or an ellipsoid, with a minimum height of approximately 6 metres (20 ft) and a minimum of 4 m (13 ft) in diameter. A standard water tower typically has a height of approximately 40 m (130 ft). 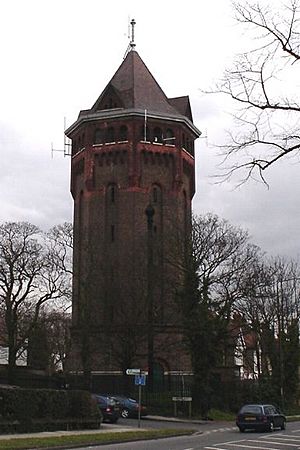 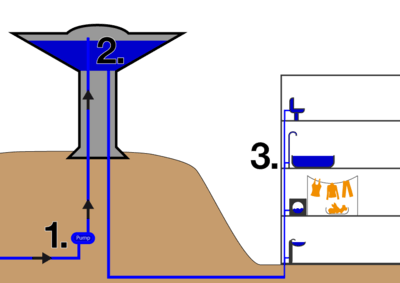 The height of the tower provides the hydrostatic pressure for the water supply system, and it may be supplemented with a pump. The volume of the reservoir and diameter of the piping provide and sustain flow rate. However, relying on a pump to provide pressure is expensive; to keep up with varying demand, the pump would have to be sized to meet peak demands. During periods of low demand, jockey pumps are used to meet these lower water flow requirements. The water tower reduces the need for electrical consumption of cycling pumps and thus the need for an expensive pump control system, as this system would have to be sized sufficiently to give the same pressure at high flow rates.

Very high volumes and flow rates are needed when fighting fires. With a water tower present, pumps can be sized for average demand, not peak demand; the water tower can provide water pressure during the day and pumps will refill the water tower when demands are lower. 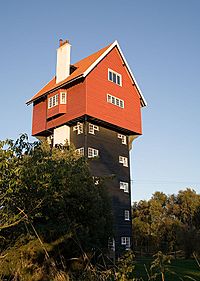 The House in the Clouds in Thorpeness functioned as the town's water tower until 1923.

Water towers can be surrounded by ornate coverings including fancy brickwork, a large ivy-covered trellis or they can be simply painted. Some city water towers have the name of the city painted in large letters on the roof, as a navigational aid to aviators. Sometimes the decoration can be humorous, as Granger, Iowa has two water towers, labeled HOT and COLD. The House in the Clouds in Thorpeness, located in the English county of Suffolk, was built to resemble a house in order to disguise the eyesore, whilst the lower floors were used for accommodation. When the town was connected to the mains water supply, the water tower was dismantled and converted to additional living space.

Sapp Bros. truck stops use a water tower with a handle and spout – looking like a coffee pot – as the company logo. Many of their facilities have decorated actual water towers (presumably non-functional) on-site.

The first and original "Mushroom" – Svampen in Swedish – was built in Örebro in Sweden in the early 1950s and later copies were built around the world including Saudi-Arabia and Kuwait.

Many small towns in the United States use their water towers to advertise local tourism, their local high school sports teams, or other locally notable factoids (see images below). Since the water tower is sometimes the highest point in the town, antennae, public address systems, cameras and tornado warning sirens are placed on them as well. 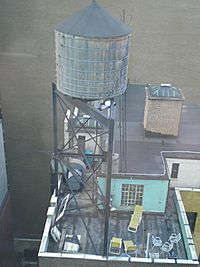 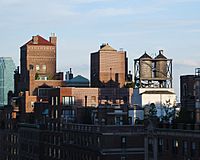 In the 1800s, New York City required that all buildings higher than six stories be equipped with a rooftop water tower. This was necessary to prevent the need for excessively high pressures at lower elevations, which could burst pipes. In modern times, the towers have become fashionable in some circles. As of 2006[update], the neighborhood of Tribeca requires water towers on all buildings, whether or not they are being used. Two companies in New York build water towers, both of which are family businesses in operation since the 1800s.

The original water tower builders were barrel makers who expanded their craft to meet a modern need as buildings in the city grew taller in height. Even today, no sealant is used to hold the water in. The wooden walls of the Water Tower are held together with cables but leak through the gaps when first filled. As the water saturates the wood it swells, the gaps close and become impermeable.

The rooftop water towers store 25,000 litres (5,500 imp gal) to 50,000 litres (11,000 imp gal) of water until it is needed in the building below. The upper portion of water is skimmed off the top for everyday use while the water in the bottom of the tower is held in reserve to fight fire. When the water drops below a certain level, a pressure switch, level switch or float valve will actuate a pump or open a public water line to refill the water tower.

Architects and builders have taken varied approaches to incorporating water towers into the design of their buildings. On many large commercial buildings, water towers are completely hidden behind an extension of the facade of the building. For cosmetic reasons, apartment buildings often enclose their tanks in rooftop structures, either simple unadorned rooftop boxes, or ornately decorated structures intended to enhance the visual appeal of the building. Many buildings, however, leave their water towers in plain view atop utilitarian framework structures. 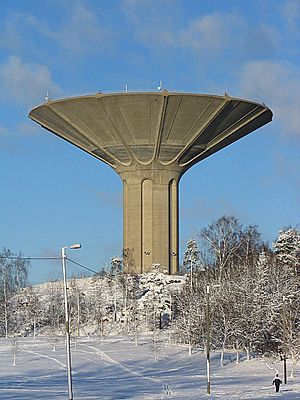 The mushroom-shaped concrete water tower of Roihuvuori in Helsinki, Finland was built in the 1970s. It is 52 metres high and can hold around 12,000 m³ of water.

Water towers are very common in India, where the electricity supply is erratic in most places.

In many countries, water towers have been taken out of the water supply system and replaced by pumps alone. Water towers are often regarded as monuments of civil engineering. Some are converted to serve modern purposes. For example, the Wieża Ciśnień in Wroclaw, Poland.

Historically, railroads that used steam locomotives required a means of replenishing the locomotive's tenders. Water towers were common along the railroad. The tenders were usually replenished by water cranes, which were fed by a water tower.

Some water towers are also used as observation towers, and some restaurants, such as the Goldbergturm in Sindelfingen, Germany, or the second of the three Kuwait Towers, in the City-State of Kuwait. It is also common to use water towers as the location of transmission mechanisms in the UHF range with small power, for instance for closed rural broadcasting service, portable radio, or cellular telephone service.

Unused water towers can be employed for their energy storing capacity to generate electricity from renewable energy sources. For example, if a tower is coupled with a wind turbine, the storing capacity of the water tower can be used to store erratic wind energy, and to create a steady power source.

Alternatives to water towers are simple pumps that can be mounted on top of the water pipes in order to increase the water pressure. 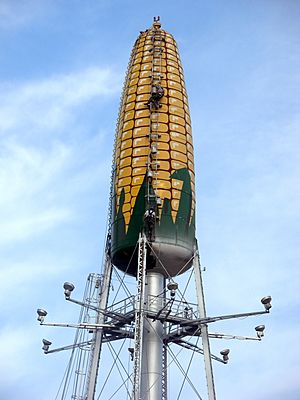 Water tower painted as an ear of corn

Famous water towers in the United States include:

Famous water towers in the UK include:

All content from Kiddle encyclopedia articles (including the article images and facts) can be freely used under Attribution-ShareAlike license, unless stated otherwise. Cite this article:
Water tower Facts for Kids. Kiddle Encyclopedia.