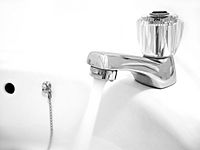 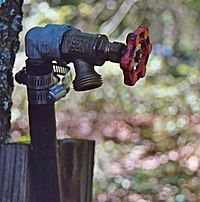 A tap, faucet, or spigot is something that a liquid or gas comes out of. Taps usually have a handle that can be turned to start or stop the liquid coming out.

Many taps give water and are used in homes. They are found in kitchens and bathrooms.

Water that comes out of a tap is called tap water. At many restaurants, a person can ask for tap water instead of bottled water.

All content from Kiddle encyclopedia articles (including the article images and facts) can be freely used under Attribution-ShareAlike license, unless stated otherwise. Cite this article:
Tap (valve) Facts for Kids. Kiddle Encyclopedia.