Disney's Hollywood Studios is a theme park at the Walt Disney World Resort near Orlando, Florida, United States. Its theme is show business, based on Hollywood in the 1930s and 1940s. It was the third park built at the resort. It opened on May 1, 1989, as Disney-MGM Studios.

In 2009, the park had around 9.7 million guests, ranking it the fourth-most visited amusement park in the United States, and seventh-most visited in the world.

The park symbol is The Sorcerer's Hat, which is based on the magical hat from Fantasia; it replaced the Earful Tower as the park's icon in 2001 but now both have been removed.

The park has six themed areas. Unlike the other Walt Disney World parks, Disney's Hollywood Studios does not have a defined layout; it is more a mass of streets and buildings that blend into each other, much like a real movie studio would. The park used to have a large Hidden Mickey in the plaza at the end of Hollywood Boulevard which could be seen in aerial photographs of the park and on the park's early guide maps. However, construction and other changes to the park have gotten rid of much of this image.

Hollywood Boulevard is the park's main entrance and is lined with stores selling Disney merchandise. Parades such as the Pixar Block Party Bash travel down Hollywood Boulevard on their route through the park, and live street entertainment can be found here throughout the day. Michael Eisner, who had a major part in the park's creation ever since the earliest development, demanded the opening land operate on the same principle as Main Street, U.S.A. in Magic Kingdom, but in a style more fitting to the Studios.

At the far end of Hollywood Boulevard is the Sorcerer's Hat, the icon of Disney's Hollywood Studios. Behind it, inside a replica of Grauman's Chinese Theater, is The Great Movie Ride, a dark ride with scenes from several classic movies, including Casablanca, The Wizard of Oz and Raiders of the Lost Ark. 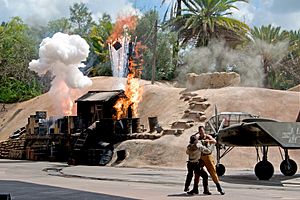 Action on the set of Indiana Jones Epic Stunt Spectacular!

Echo Lake is the park's small oval-shaped lagoon, which was designed to form one of the ears in the big Hidden Mickey from the park's original layout. Around it are many attractions and services, some in buildings designed to look like the "California Crazy" form of architecture from Hollywood's Golden Age.

At The American Idol Experience, park guests can audition and sing for live audiences, and win a special front-of-the-line pass for the popular TV series' real tryouts. Next door, Sounds Dangerous! features a 3-D audio presentation starring comedian Drew Carey. In between them is the A.T.A.S. Hall of Fame Plaza, a display of busts of past and present icons of the television era, such as Oprah Winfrey and Walt Disney.

Echo Lake has three attractions based on characters and movies produced by George Lucas' Lucasfilm studio. Star Tours: The Adventures Continue is an upcoming motion simulator ride set in the Star Wars universe, and is a duplicate of the yet-to-be opened attraction at Disneyland. Jedi Training Academy, a live-action stage show, invites children to become "padawan learners" and receive "lightsaber training" from a Jedi master. Lastly, the live-action Indiana Jones Epic Stunt Spectacular! re-enacts various scenes from Raiders of the Lost Ark while illustrating how movie stunts are performed. 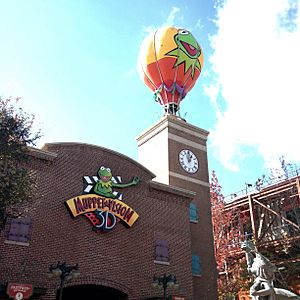 The entrance and exterior of Muppet*Vision 3D

Originally the New York Street backlot set that was part of the park's original Backlot Studio Tour, the section was later opened to pedestrian traffic. Recently, some of it was changed to look like San Francisco and New York. The current version of the Studio Backlot Tour features the American Film Institute Showcase, a rotating exhibit of movie props and memorabilia, and a tram ride through the backlot areas and through Catastrophe Canyon, an effects-laden "movie set." Kids can play on giant plants and toys at the Honey, I Shrunk the Kids Movie Set Adventure, based on the 1989 Disney movie. Added in 2005, the Lights, Motors, Action! Extreme Stunt Show is a behind-the-scenes look at how car action sequences are made for movies, and is based on a similar show at Walt Disney Studios Park.

This section of the park was originally the starting point for the tours of the park's active production studios. Its entrance is marked by a square "studio arch," much like a real Hollywood studio lot entrance might be marked. The Animation Courtyard is home to a number of attractions based on Disney characters of yesterday, today and tomorrow. The Magic of Disney Animation is an attraction that shows how to animate a character. It also has games and exhibits, along with meet-and-greet areas for Disney and Pixar characters.

Mickey Avenue, a section inside the Animation Courtyard, has two walk-through exhibits. Walt Disney: One Man's Dream is about the life and legacy of Walt Disney. It has photos, models, rare artifacts and a short biographical movie narrated by Julie Andrews. At "Journey into Narnia," guests can see props and set pieces from the Chronicles of Narnia movie series (originally distributed by Disney; now handled by 20th Century Fox), as well as meet Prince Caspian from The Chronicles of Narnia: Prince Caspian.

The park's newest section has many of the original soundstages used when the park still made TV shows. Today, Toy Story Land looks like the Emeryville, California campus of Pixar Animation Studios with attractions including Toy Story Midway Mania!, an interactive 3D attraction based on classic carnival midway games, each hosted by characters from the Toy Story movie series. Toy Story Land is also the home of Luxo Jr., a six-foot-tall audio-animatronic version of Pixar's desk-lamp mascot. The moving character performs periodic shows throughout the day and evening across from Toy Story Midway Mania.

Sunset Boulevard was the first expansion to Disney's Hollywood Studios, opening in July 1994. The main attraction on Sunset Boulevard is The Twilight Zone Tower of Terror, a thrill ride based on the classic television series. Located nearby is Rock 'n' Roller Coaster Starring Aerosmith, an indoor roller coaster in the dark with three inversions that starts moving at a high speed.

Sunset Boulevard has two outdoor amphitheaters for live stage shows. The covered Theater of the Stars has Beauty and the Beast Live on Stage, a stage show with scenes from the movie. The open-air Hollywood Hills Amphitheater is the home of Fantasmic!, a nighttime show with Mickey Mouse and many other Disney characters in a story filled with fireworks, lasers and water effects.

All content from Kiddle encyclopedia articles (including the article images and facts) can be freely used under Attribution-ShareAlike license, unless stated otherwise. Cite this article:
Disney's Hollywood Studios Facts for Kids. Kiddle Encyclopedia.