The Twilight Zone Tower of Terror facts for kids 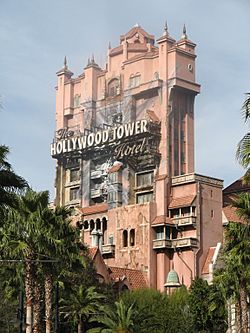 The Twilight Zone Tower of Terror in Disney's Hollywood Studios 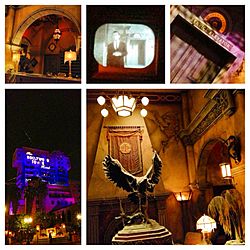 There are currently four versions. Three are based on the TV show The Twilight Zone.

"Guests" get on what appears to be an old "freight elevator". The elevator car goes past several old hallways. It passes what appear to be ghosts of former guests. Next the ride enters a dark vertical shaft. Suddenly the elevator snaps upward and with the sounds and sparks of the elevator cables breaking it plunges downward. It freefalls 13 floors down before stopping. Then it climbs, stops, falls again and repeats the process. People outside the ride can hear the riders screaming in terror. The ride attracts thrill-seekers who ride again and again. Each time the ride is a little different.

People must be at least 40 inches (102 cm) tall to enter the ride. Wheelchairs and mobility scooters must be left behind (users must be strong enough to stand). Anyone suffering from neck, back, or heart problems, motion sickness or claustrophobia are advised not to ride. Pregnant women may not ride. Anyone with a fear of heights or fear of falling may want to avoid this ride as well.

All content from Kiddle encyclopedia articles (including the article images and facts) can be freely used under Attribution-ShareAlike license, unless stated otherwise. Cite this article:
The Twilight Zone Tower of Terror Facts for Kids. Kiddle Encyclopedia.