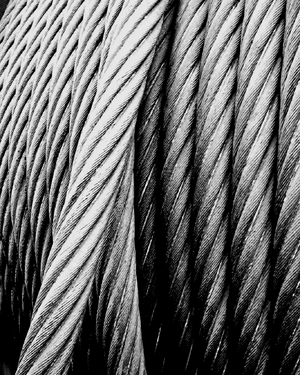 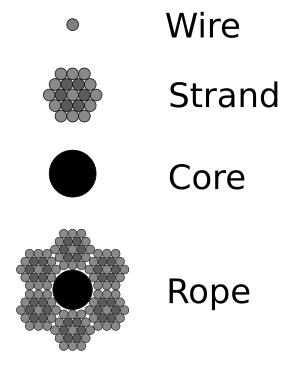 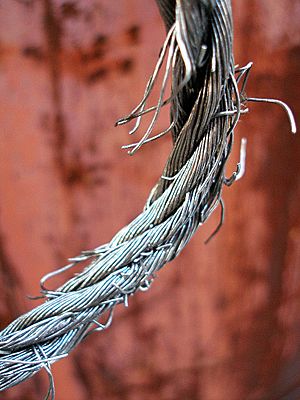 This image of a fraying wire rope shows some individual wires.

Modern wire rope was invented by the German mining engineer Wilhelm Albert in the years between 1831 and 1834 for use in mining in the Harz Mountains in Clausthal, Lower Saxony, Germany. It was quickly accepted because it was better than ropes made of hemp or to metal chains, such as had been used before.

Wilhelm Albert's first ropes consisted of wires twisted about a hemp rope core, six such strands then being twisted around another hemp rope core in alternating directions for extra stability. Earlier forms of wire rope had been made by covering a bundle of wires with hemp.

In America wire rope was later manufactured by John A. Roebling, forming the basis for his success in suspension bridge building. Roebling introduced a number of innovations in the design, materials and manufacture of wire rope.

Manufacturing a wire rope is similar to making one from natural fibres. The individual wires are first twisted into a strand, then six or so such strands again twisted around a core. This core may consist of steel, but also of natural fibres such as sisal, manila, henequen, jute, or hemp. This is used to cushion off stress forces when bending the rope.

The specification of a wire rope type, including the number of wires per strand, the number of strands, and the lay of the rope, are is documented using a commonly accepted coding system, with abbreviations. For example, the rope shown in the figure "Wire rope construction" is designated:

Each of the sections of the wire rope designation described above is variable. There are therefore a large number of combinations of wire rope that can be specified in this manner. The following abbreviations are commonly used to specify a wire rope.

All content from Kiddle encyclopedia articles (including the article images and facts) can be freely used under Attribution-ShareAlike license, unless stated otherwise. Cite this article:
Wire rope Facts for Kids. Kiddle Encyclopedia.