Magic Kingdom is one of four theme parks at the Walt Disney World Resort near Orlando, Florida. Magic Kingdom was the first park built at the resort. It opened on October 1, 1971. D It was designed and built by WED Enterprises. The park's layout and attractions are similar to Disneyland in Anaheim, California. In 2009, the park had around 17.2 million visitors, making it the most visited theme park in the world.

The symbol of Magic Kingdom is Cinderella Castle. That castle is based on the castle in the movie Cinderella.

The Transportation and Ticket Center, also called the TTC, is the first place park guests enter after the parking lot. At the TTC, guests can buy tickets to enter the park. After that, they can board either a boat or the Monorail, which will take them to the park. Walt Disney built the resort to have a big lake between the parking lot and the park so guests would have a magical experience watching the park come slowly into view.

Magic Kingdom is divided into six areas. Most of them are called "lands". The lands are Adventureland, Frontierland, Fantasyland, and Tomorrowland. The other areas are Main Street, U.S.A. and Liberty Square. 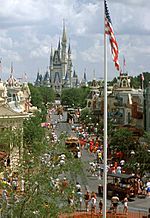 Main Sreet, U.S.A. is the first area guests enter after going through the gates. It was built to look like a typical street in the United States. The buildings use forced perspective to make the street look longer than it really is and Cinderella Castle look taller. That means the buildings closer to the viewer are taller than the buildings farther away.

The street is lined with shops and restaurants. The windows of the buildings have the names of people who worked for the Walt Disney Company on them.

Adventureland is themed around exploring unknown lands, like jungles and islands. Rides and shows in this area are the Enchanted Tiki Room (Under New Management), the Jungle Cruise, and Pirates of the Caribbean, among others. 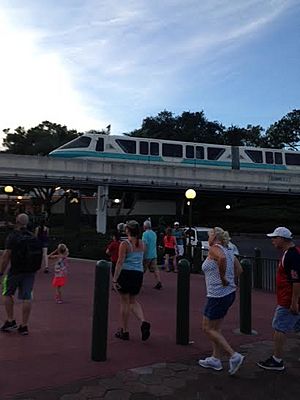 Frontierland is based on the American west in the 1800s, also called the wild west. Rides and shows in this area include Big Thunder Mountain, Splash Mountain, and the Country Bear Jamboree.

Liberty Square is based on colonial America around the time of the American Revolution. Rides and shows in this area include the Hall of the Presidents and the Haunted Mansion.

Fantasyland is based on the magic of fairytales and has rides based on many of Disney's animated films. Rides in this area include "it's a small world", Peter Pan's Flight, and Dumbo.

Tomorrowland is based on visions of the future. Rides and shows in this area include Space Mountain, Stitch's Great Escape!, and Walt Disney's Carousel of Progress.

All content from Kiddle encyclopedia articles (including the article images and facts) can be freely used under Attribution-ShareAlike license, unless stated otherwise. Cite this article:
Magic Kingdom Facts for Kids. Kiddle Encyclopedia.