Their style, which is rooted in blues-based hard rock, has come to also incorporate elements of pop rock, heavy metal, and rhythm and blues, and has inspired many rock artists. They are sometimes referred to as "the Bad Boys from Boston" and "America's Greatest Rock and Roll Band".

Perry and Hamilton, originally in a band together called the Jam Band, met up with Tyler, Kramer, and guitarist Ray Tabano, and formed Aerosmith. In 1971, Tabano was replaced by Whitford, and the band began developing a following in Boston.

They were signed to Columbia Records in 1972, and released a string of gold and platinum albums, beginning with their 1973 eponymous debut album, followed by Get Your Wings in 1974. In 1975, the band broke into the mainstream with the album Toys in the Attic, and their 1976 follow-up Rocks cemented their status as hard rock superstars. Their first five albums have since attained multi-platinum status.

Throughout the 1970s, the band toured extensively and charted a dozen Billboard Hot 100 singles, including their first Top 40 hit "Sweet Emotion" and the Top 10 hits "Dream On" and "Walk This Way".

By the end of the decade, they were among the most popular hard rock bands in the world and developed a following of fans, often referred to as the "Blue Army". 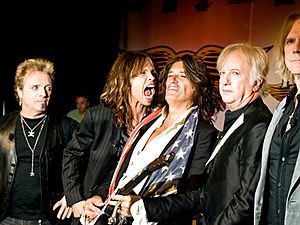 In the fields of technology and video games, Aerosmith has achieved several feats. In 1994, Aerosmith released the song "Head First" on the CompuServe online service, which is considered to be the first full-length commercial product available online.

All content from Kiddle encyclopedia articles (including the article images and facts) can be freely used under Attribution-ShareAlike license, unless stated otherwise. Cite this article:
Aerosmith Facts for Kids. Kiddle Encyclopedia.