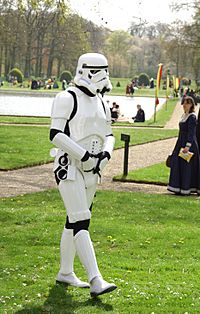 A Stormtrooper at the Elf Fantasy Fair

In the fictional Star Wars universe, Stormtroopers are highly trained soldiers working for the evil Emperor and his sidekick Darth Vader. They wear white armor and helmets, and use blaster guns.

All content from Kiddle encyclopedia articles (including the article images and facts) can be freely used under Attribution-ShareAlike license, unless stated otherwise. Cite this article:
Stormtrooper (Star Wars) Facts for Kids. Kiddle Encyclopedia.