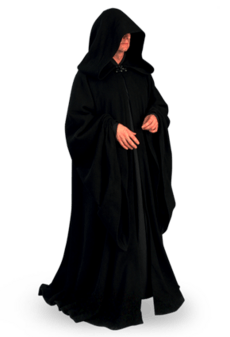 Palpatine (also known as the Emperor and Darth Sidious) is a character from the Star Wars universe. He is the main villain of the Star Wars movies.

His most famous and once only seen force ability is force lightning seen in the last episode Return of the Jedi which is forked to spread the damage even further and is blueish purple. He is played by Ian McDiarmid. He is seen in Episode V for the first time. Palpatine is believed to be the true villain of the Star Wars films because he was the one who caused Anakin Skywalker to join the Dark Side of the Force.

In Episode I, The Phantom Menace, he is a Senator from the planet of Naboo. He is also secretly a Sith Lord, Darth Sidious. Sidious pulls the strings behind the scenes to cause unrest and dispute in the corrupt Galactic Senate, hence the films's title. His apprentice during this time is Darth Maul, who is slain in battle by Obi-Wan Kenobi. At the end of Episode I, he has risen to the office of Supreme Chancellor and begins his rise to power.

In Episode II, Attack of the Clones, Palpatine secretly continues to bring the galaxy to civil war. He has a new apprentice, Count Dooku, who leads the Separtist Droid Army and goes by the name Darth Tyrannus. Dooku is slain by Anakin Skywalker on a rescue mission to free the Chancellor in Episode III, Revenge of the Sith.

Palpatine rose to complete power in Episode III, when he sent Anakin to lead an attack on the Jedi Temple and ordered the Clone Troopers to execute Order 66. Palpatine battled Yoda in a duel which would decide the fate of the Galaxy. He narrowly defeated Yoda, and was able to form a new order upon the fallen Republic; he created the first Galactic Empire. In the time frame from his creation of the Empire and his death, Palpatine was a cold, merciless ruler. He ruled through fear. His evil was staggering as he dominated the galaxy with his ruthless enforcer, Darth Vader.

Palpatine ruled the galaxy for 23 years, when in the end he was killed by his own apprentice (assistant being trained), Darth Vader.

All content from Kiddle encyclopedia articles (including the article images and facts) can be freely used under Attribution-ShareAlike license, unless stated otherwise. Cite this article:
Palpatine Facts for Kids. Kiddle Encyclopedia.