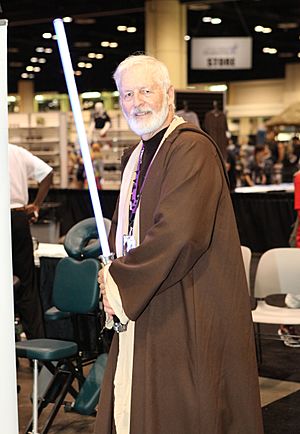 With Anakin Skywalker/Darth Vader, R2-D2, and C-3PO, he is one of the few major characters to appear in all of the six Star Wars movies. He is portrayed in the original trilogy by Alec Guinness and in the prequel trilogy by Ewan McGregor and voiced by James Arnold Taylor in Star Wars: The Clone Wars series and Star Wars Rebels series.

All content from Kiddle encyclopedia articles (including the article images and facts) can be freely used under Attribution-ShareAlike license, unless stated otherwise. Cite this article:
Obi-Wan Kenobi Facts for Kids. Kiddle Encyclopedia.