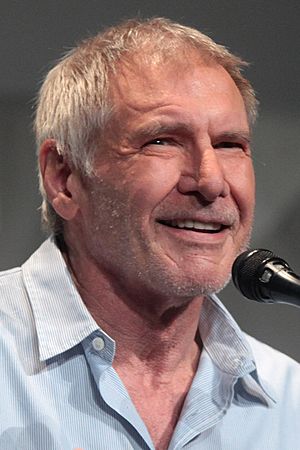 Harrison Ford reprised the role of Han for Star Wars: The Force Awakens in 2015.

Han Solo is a fictional character in Star Wars played by Harrison Ford. He appears for the first time in Star Wars Episode IV: A New Hope as pirate and smuggler with his Wookiee friend, Chewbacca. He was voted as the second greatest Star Wars character, behind Darth Vader.

At first, Solo and his companion Chewbacca are hired by Jedi Luke Skywalker and Obi-Wan Kenobi to get Skywalker and Kenobi aboard the Death Star to save Princess Leia. While Solo seems to be interested only in being paid at first, he comes back to save Luke. Solo later falls in love with Leia.

In Star Wars: The Force Awakens, it is revealed that Solo and Leia have a son called Ben Solo (known as Kylo Ren) who falls to the First Order. Solo is killed by Ren towards the end of the movie after being stabbed by a lightsaber through the chest and falling into a deep shaft.

All content from Kiddle encyclopedia articles (including the article images and facts) can be freely used under Attribution-ShareAlike license, unless stated otherwise. Cite this article:
Han Solo Facts for Kids. Kiddle Encyclopedia.