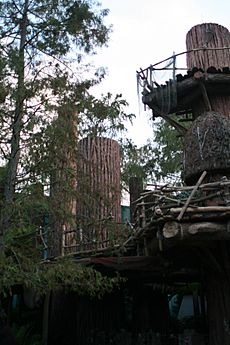 Ewoks are a fictional race of small, bear-like creatures from George Lucas' Star Wars universe. They first appeared in the film Return of the Jedi.

They live on the forests on the moon of the Planet Endor. They often wear the skins or skulls of animals they have hunted. The most famous Ewok is Wicket W. Warwik, a brave Ewok who destroyed an entire Imperial shield projector. The Ewoks were also well known for their victory against the Empire in the "Battle of Endor".

All content from Kiddle encyclopedia articles (including the article images and facts) can be freely used under Attribution-ShareAlike license, unless stated otherwise. Cite this article:
Ewok Facts for Kids. Kiddle Encyclopedia.