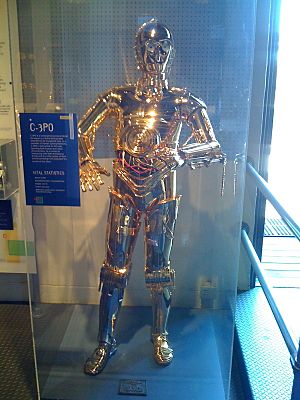 Figure of C-3PO at the San Diego Museum of Man

C-3PO (pronounced See-Threepio, often shortened to "Threepio") is a robot character from the fictional Star Wars universe, created by Anakin Skywalker circa 32 BBY prior to the events of Star Wars Episode I: The Phantom Menace. He is a protocol droid, adept, he says in Star Wars Episode IV: A New Hope, at "human-cyborg relations" and boasts that he is fluent "in over six million forms of communication."

He is portrayed, in voice and physical form, in all six films, by actor Anthony Daniels. Threepio's appearance was inspired by the mysterious robot in the 1927 film Metropolis.

C-3PO is generally seen with his long-time counterpart, R2-D2, who is a small, quirky astromech droid. Threepio's main function as a protocol droid is to assist with etiquette, customs, and translation so that meetings of different cultures run smoothly. Threepio's TranLang III Communicator module, combined with his AA-1 VerboBrain, allow his fluency. C-3PO is also composed of many ancient parts, due to salvage that Watto and Tatooine could provide the enslaved Anakin Skywalker. He is very loyal to his masters (as his programming dictates but is sometimes portrayed as somewhat effeminate) and has served over 40 years since his creation (the only masters seen in the original six films were: Anakin Skywalker, Shmi Skywalker, Cliegg Lars, Padmé Amidala, Raymus Antilles, Owen Lars and finally Luke Skywalker; masters other than those mentioned were seen in the animated TV series Star Wars: Droids, which may account for some of the rest of Threepio's masters). Jabba the Hutt was also "master" to Threepio for a short while in Return of the Jedi, but as this was part of a subterfuge to smuggle R2-D2 and Luke Skywalker's lightsaber into Jabba's palace, Jabba arguably does not count as one of Threepio's masters.

C-3PO is one of the few characters to appear in all six of the Star Wars feature films (in Episode I, he appears, but was just introduced by Anakin Skywalker), and one of the very few to be played five times by the same actor. Fans have suggested he may have had a prior existence before being taken apart; this was before the events in The Phantom Menace, in which we learn that Threepio was built by Anakin Skywalker from those scrap parts. After Anakin leaves to be trained as a Jedi, Threepio is left with his mother, Shmi Skywalker, on Tatooine. Appearing mainly in a skeletal state in the film, he doesn't gain his coverings until Attack of the Clones, in the property now of Cliegg Lars. After Anakin and Padmé visit the planet, Threepio follows his maker.

As revealed in Star Wars: Clone Wars, Threepio received his familiar gold plating from Padmé to better fit his role as her assistant. In Inside the Worlds of Star Wars Trilogy, Threepio is shown shutting down after seeing Anakin's lightsaber, because his "protocol programming requires him to request that he shut down to protect his ex-owner's secrets," but this contradicts the end of Star Wars Episode III: Revenge of the Sith, in which his memory is wiped and, in the process, disavowing any knowledge of Anakin's descent into the dark side of the Force or Padmé's death. (However, in Alan Dean Foster's novel Splinter of the Mind's Eye, C-3PO states that he and R2-D2 were shut down by Darth Vader, saying that he 'knew all of the proper shut-down codes', and at the end of the radio version of Return of the Jedi, Threepio recognizes Darth Vader as Luke's father, which may hint that some point after his reactivation Threepio somehow learned about Anakin/Vader's identity, and may also give a hint to the identity his and Artoo's previous owners.)

Once Threepio was reactivated with his memory wiped, his first job, presumably under Captain Antilles, was to program binary loadlifters. This explains why he doesn't recognize Tatooine, the name Skywalker, or Obi-Wan Kenobi during the timeframe of A New Hope.

In most of the movies, C-3PO is damaged at some point. In Attack of the Clones, his head is knocked off; in A New Hope, he suffers a dent in his head and his arm is ripped off by the Sandpeople on Tatooine; in The Empire Strikes Back, he is blasted to pieces in Bespin's Cloud City; and in Return of the Jedi, his eye is ripped out by Salacious Crumb, one of Jabba the Hutt's "pets". In Star Wars Episode I: The Phantom Menace, he wasn't even completely built.

C-3PO hates adventure, and his motto is, "We're doomed!". In the audio commentary for Revenge of the Sith, it is noted that Threepio is finally in his true element for the first time.

Episode I: In his last scene. "Sell me. Oh No", later replaced by "oh my".
Episode II: When his head is separated during the droid factory scene.
Episode III: Last dialogue.
Episode IV: When in the operating room.
Episode V: In the asteroid, after hearing the mynocks.
Episode VI: In the ewoks village.

All content from Kiddle encyclopedia articles (including the article images and facts) can be freely used under Attribution-ShareAlike license, unless stated otherwise. Cite this article:
C-3PO Facts for Kids. Kiddle Encyclopedia.