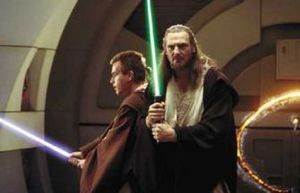 The Jedi are one of the major characters in the Star Wars universe. They are depicted as an ancient monastic, academic and paramilitary organization whose origin dates back to 25,000 BBY (Before Battle of Yavin; the destruction of the first Death Star).

The Jedi Order mostly consists of polymaths: teachers, philosophers, scientists, engineers, physicians, diplomats and warriors. The Jedi value knowledge and wisdom, and serve others through acts of charity, citizenship, and volunteerism; this ideology is a recurring theme in the Star Wars universe.

Their traditional weapon is the lightsaber, a device which generates a blade-like plasma powered by a kyber crystal. The fictional organization has inspired a real-world new religious movement, Jediism. 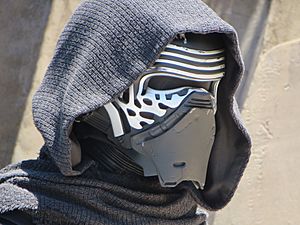 As depicted in the canon, the Jedi study and utilize the Force, in order to help and protect those in need. The Jedi members, known as Jedi Knights, respect all life by defending and protecting those who cannot do it for themselves, striving for peaceful and non-combative solutions and fighting only in self-defense and for the defense of those they protect.

Like their evil counterparts, the Sith, their main weapon is the lightsaber. By training the mind and the body, the Jedi seek to improve themselves by gaining access to the Force while also seeking to improve those individuals and groups they come in contact with.

The Jedi Code was a set of rules that governed the behavior of the Jedi Order. It taught its followers to not give in to feelings of anger toward other lifeforms, which would help them resist fear and prevent them from falling to the dark side of the Force. 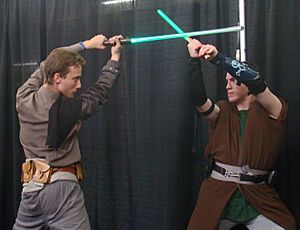 All content from Kiddle encyclopedia articles (including the article images and facts) can be freely used under Attribution-ShareAlike license, unless stated otherwise. Cite this article:
Jedi Facts for Kids. Kiddle Encyclopedia.