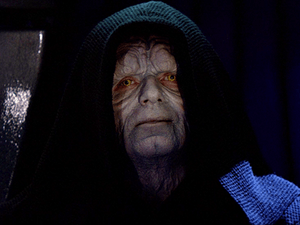 Darth Sidious inherits and brings to fruition a thousand-year vendetta; a plot to reinstate the Sith as the ruling power in the galaxy, culminating in the Great Jedi Purge and the formation of the first Galactic Empire with himself in the position of Emperor. His demise ended the Banite Sith Order.

In the fictional Star Wars universe, the Sith are users of the Dark side of The Force and the opposite of the Jedi.

The Sith live to dominate all others and to cause pain throughout the Star Wars galaxy. Some famous Sith are Darth Vader, Emperor Palpatine and Darth Maul.

All content from Kiddle encyclopedia articles (including the article images and facts) can be freely used under Attribution-ShareAlike license, unless stated otherwise. Cite this article:
Sith Facts for Kids. Kiddle Encyclopedia.