Survival of the fittest facts for kids 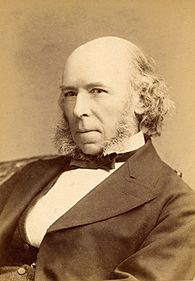 Herbert Spencer coined the phrase, "survival of the fittest."

Survival of the fittest is a famous phrase of Herbert Spencer which describes the idea that, in nature, there is competition to survive and reproduce. It is a metaphor, as are the phrases struggle for existence, and natural selection, both of which were used by Charles Darwin. Scientists often use such metaphors as shorthand for key ideas. These metaphors stick in the mind, but they need to be properly understood, or they may be used wrongly.

Herbert Spencer was a British social philosopher who applied his personal conception of evolution to many other fields, from the origin of the solar system to economics. He first used the term in his book Principles of Biology, published in 1864. In that book (vol 1 p444) he wrote: "This survival of the fittest, which I have here sought to express in mechanical terms, is that which Mr. Darwin has called ‘natural selection’, or the preservation of favoured races in the struggle for life".

Spencer later published a book called The Man versus the State. There, he used the phrase to explain why societies of a militant type would not adopt his theories. The way he uses the term suggests he is talking about a general principle.

Thus by survival of the fittest, the militant type of society becomes characterized by profound confidence in the governing power, joined with a loyalty causing submission to it in all matters whatever.

In the first four editions of On the Origin of Species, Darwin used only the phrase natural selection. It was his way of making an analogy with artificial selection (selective breeding), a practice which was well understood in England at that time.

In the introduction to the 5th edition Darwin gave full credit to Spencer, writing "I have called this principle, by which each slight variation, if useful, is preserved, by the term Natural Selection, in order to mark its relation to man's power of selection. But the expression often used by Mr. Herbert Spencer of the Survival of the Fittest is more accurate, and is sometimes equally convenient".

The co-discoverer of natural selection, Alfred Russel Wallace, also used the terms survival of the fittest and struggle for existence. He rather preferred the last two terms to natural selection. Since both these evolutionists used them, the three metaphors were obviously useful in getting over what were, at the time, unfamiliar ideas.

Current use of the phrase

The phrase survival of the fittest is shorthand for the fact that not all members of a species will contribute equally to the next generation. It is not a value judgement, but a concept of evolution equivalent to natural selection. Fitness is now used in a highly technical sense in population genetics, which should not be confused with its use in everyday language.

Today, the phrase survival of the fittest is widely used in popular literature for many topics, not just those related to biology. It has widely been used both by people who are in favour of Social Darwinism and those who are against it. It has also been used to talk about competition of all kinds. Popular literature often uses the phrase as a catchphrase. All such extensions of a metaphor need to be watched carefully. They may preserve the original meaning, or they may not.ta:தக்கன பிழைக்கும்

All content from Kiddle encyclopedia articles (including the article images and facts) can be freely used under Attribution-ShareAlike license, unless stated otherwise. Cite this article:
Survival of the fittest Facts for Kids. Kiddle Encyclopedia.