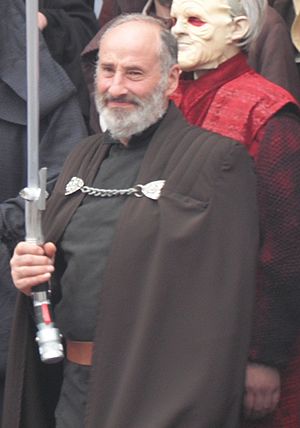 Count Dooku of Serenno (also known as Darth Tyranus) is a character from the Star Wars universe. Dooku is one of the major characters in Episode II: Attack of the Clones. He was played by late Christopher Lee.

He is the second known student of Darth Sidious. Dooku is also the leader of the Confederacy of Independent Systems during the Clone Wars.

All content from Kiddle encyclopedia articles (including the article images and facts) can be freely used under Attribution-ShareAlike license, unless stated otherwise. Cite this article:
Count Dooku Facts for Kids. Kiddle Encyclopedia.