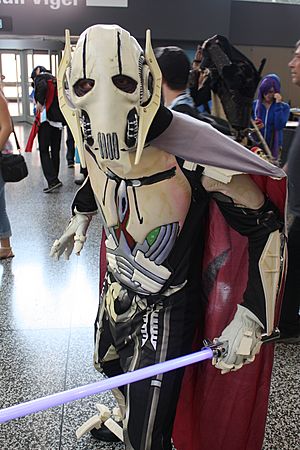 A cosplayer dressed up as Grievous.

General Grievous is a fictional character and a villain in the Star Wars series. He is a Kaleesh turned cyborg who served for the CIS during the Clone Wars.

He was first voiced by John DiMaggio and Richard MacGonagle in Star Wars: Clone Wars before Matthew Wood took over starting with Star Wars Episode III: Revenge of the Sith.

All content from Kiddle encyclopedia articles (including the article images and facts) can be freely used under Attribution-ShareAlike license, unless stated otherwise. Cite this article:
General Grievous Facts for Kids. Kiddle Encyclopedia.